Based on a comment over at $30 a week habit, I thought I'd float this one out there. I'd be interested in picking up the Topps Heritage High Number box for a cost of $100 and breaking the thing into teams. I made a quick trip to the post office, and learned I could send out a small envelope of cards for about 5-7 bucks each. I tested it containing one card in a hard toploader and 15 in a team bag.

I was thinking of putting the price at $20.00 for one team and the buyer getting a second team via random.org drawing. For that, you'd get the cards, and, should you be the one with the autograph, you'd get it shipped to you with a tracking number. I'll put the card of your choice from your team in a hard toploader, with the rest being in a team bag, with everything in a bubble envelope. I've found that with basic shipping, most stuff gets to its destination stateside within a week or so.

Anything beyond the additional cost of the cards and shipping will be turned into additional cards that I'd pick up at an LCS/Walmart/whatever and include as part of the break. (Probably some sort of 2012 product, but we'll see). I want to hold off because there's a chance I could be hit with a duty on the package when it crosses the border, which is why I've tentatively got the price where it is.

I'll be looking for 14 or 15 people to grab a team. There's a small chance I'll pick up either the Jays or the Mets as my team, depending on how the checklist looks. 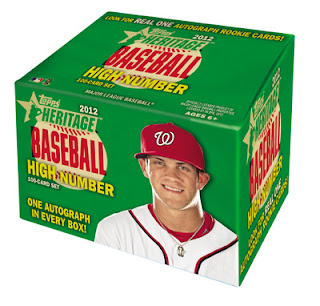