Trade with Home of the Toddfather Part 2

Continuing to go through the goodies. 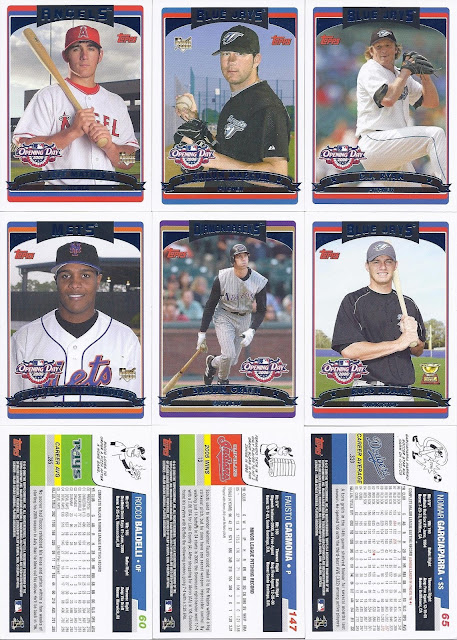 There's a lot to like among the 2006 Opening Day cards. Lots of Blue Jays and Mets in the group, including Shawn Green, one of a handful of players to have time in both uniforms. You can't go wrong with any cards that have cartoons on the back of them, although I cringe at the stereotypes on the Baldelli card, and the sketchy grammar on the Carmona card. That could definitely use either a rewording, or a strategically placed comma, or both.

I'm amused by how they handle the cartoon for a player without a lot of major league experience or hype. Simply put random baseball trivia on the card. Paul McAnulty didn't warrant a cartoon, so instead, he gets a reference to Cal Ripken Jr.'s streak on the back of his. Although the similarly unspectacular Russ Adams did earn a reference to his minor league awards. 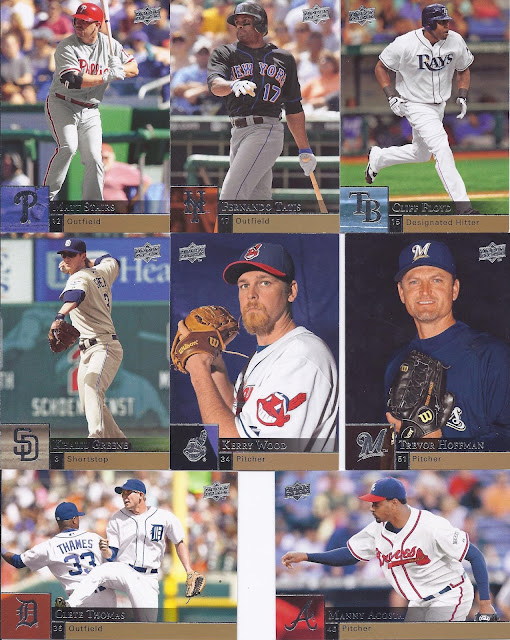 The cards that came out with the most frequency in the trade were Upper Decks from 2009. There were a few cards of guys playing for teams that you generally don't associate them with (Wood, Floyd, Hoffman). I really Matt Stairs, especially since he is only one of a handful of Canadians to suit up for both the Expos and the Blue Jays. (Off the top of my head, I can only think of Rob Ducey and Denis Boucher as others. Plus, I really like the horizontal shot on the Clete Thomas card.

As for Manny Acosta, why shouldn't I post the card of the guy who'd come in to pitch when the Mets were getting shelled this year? Which means I saw way too much of Manny Acosta in the second half of the season.

Posted by buckstorecards at 11:53