The dollar store hockey repacks seemingly always feature a lot of early 90's cards. I must have a half dozen Neil Wilkinson cards from 1991 when he was picked in the expansion draft by the San Jose Sharks. In all of the posed shots, he's rocking an incredible, albeit stereotypical hockey haircut. Deciding which one I liked best was a challenge, but I went for this one, where he also seems to be going for the "What?!? The cameraman told me to look dreamy." look. 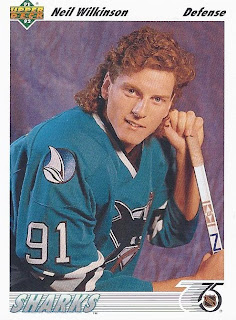 I still wish I'd come across (although I do already have it in an album) his 1990 card from Upper Deck where the back features something really rare for a card - a fight.
Posted by buckstorecards at 13:44