I'll confess to having glommed this scan from a google image search. I found this one today, and put it down to the side because it was so incredible in its awfulness that this one had to end up in the ol' keeper binder. And now I can't find it! ARGH! So, this one will have to do. I think this was the first one that showed up while looking for "Tom Kurvers" and Parkhurst. 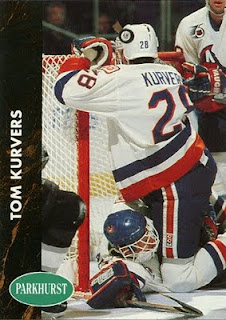 Egads. I'm thinking this was a Toronto Maple Leaf fan still bitter over the trade that sent Kurvers to T.O. in exchange for a first round pick, that, due to the Leafs consistent awfulness, seemed destined to be Eric Lindros. Quebec, however, was even worse that year, and the draft pick ended up being Scott Niedermayer. Which, given concussions and the whatnot, probably ended up being the better choice.

He isn't even facing the camera! If this was today I would seriously be accusing them of photoshopping in the Isles jersey on some random teammate.  Plus, it really isn't a good 'crash the net' when you're the focus of the shot, and you're knocking over your own goalie in a scrum by the net.

Knocked down, with your crotch perilously close to your goalie's face. Poor, Tom. Not only is he the answer to an unfortunate trivia question, but he's on one of the worst hockey cards ever.

And of course, I'd still much rather pull a card of this nature from a pack than pretty much any marquee non-Ottawa player.
Posted by buckstorecards at 15:49