It seems that every advertisement of any type has the URL for the company appear somewhere in the ad itself. Myself, I've been on the net in some form since I got an account at my University back in 1994 and used a Trumpet newsreader to communicate with the rest of the class, and read numerous groups in the alt.* and rec.* hierarchy.

I can't recall when I started noticing that companies were starting to give out their URL in their ads, but I think this was the first time I really noticed it so publicly. I was living in Ottawa at the time, and with my move, I'd adopted the Senators as my favourite team. The team had finally ditched the downtown Civic Center (which was disappointing, as I could have walked to games there) and had moved out to Kanata and the Palladium. Within a month or so, the arena was renamed the Corel Center.

So, it only became natural that Damian Rhodes' would get a new mask, and that it would work this newfangled Internet thing into it. 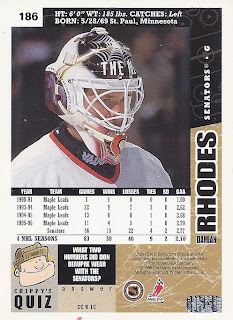 And if you look on the side of the mask, you'll see the URL for the Ottawa Senators.

In a disappointing move, when there was a recent Between The Pipes issued for Damian, and featuring the mask, the URL was not there. Boo. But that mask signified the first time I started noticing URLs outside of the Internet world.