For the Name Hall of Fame 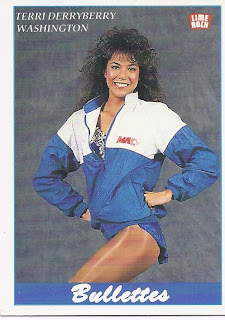 I don't get too upset when I pull a Coach/Manager card from my dollar store grabs. Usually, they are people that played the game at some level, so I can still feel I get some sort of player card. My reaction at seeing this  in among the basketball cards was first along the lines of "What in the Sam Scratch is this?". Then I focus on the fact that the Washington Bullets cheerleaders were called the Bullettes at one point, and that a woman, somewhere in the area of the American capital is named Terri Derryberry, and all is right with the world.

Then I imagine what would be my reaction to a man named Terry Derryberry, and all I could think of is that he could look forward to a career in either children's entertainment or serial killing.
Posted by buckstorecards at 13:49