Those $2.00 hockey surprise boxes are addictive. Really addictive. Addictive enough that I made a trip to one especially to pick up a couple. The first contained a couple nice cards, most notably a "Biography of a Season" Tyler Seguin, along with a pack of 08-09 Upper Decks, that had a Rick Nash, Joe Thornton, along with a choice reserve Mikko Koivu. Nice stuff.

The second pack included a bag with 4 hard top loaders. An OK start. There was also a pack containing 4 goalie cards, a pack of 03-04 Victory and a jersey card pack. Even if the latter turns out to be a guy with barely a cup of coffee in the NHL, I've got my money's worth. As a fan of masks and their artwork, I started with the goalies mask. The Bowman Mark Fitzpatrick was a dud, and Niemi's is pretty bland, but the shot of Rinne's is nice:

I went for the Victory pack next. Hey, both Hossa brothers and Olaf Kolzig's Godzilla mask in the same pack? Great! 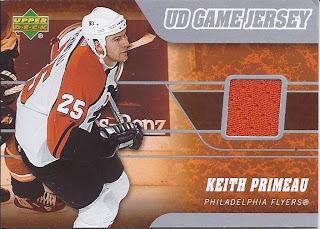 Hey. It's actually a guy who had a pretty good career in the bigs. His goal ended the longest playoff game since the 1930s, scoring at 92:01 to beat Pittsburgh. That's actually a pretty nice find. One last look through the loot.

Wait a second. That one victory card looks a little different. 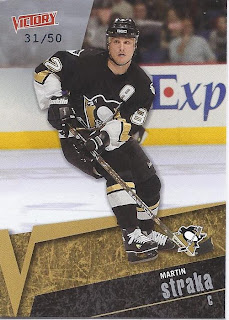 Hey! A silver parallel numbered out of 50. Sweet! Do I care that it isn't a superstar? Not one bit. Strangely it came out of the package with a dinged corner, but I really don't mind it that much. It's the first time I've pulled anything numbered out of X out of a dollar store pack.

A good morning to stop in for a quick fix.

Posted by buckstorecards at 13:28