Dollar store packs usually have two cards facing out on each side, making it quite easy to scan through them for an interesting picture or two. Facing out usually are the most important players in the pack, although I often find hidden gems in the middle. These two immediately grabbed my eye, and I couldn't resist them for these photographs alone. The fact that one of them had a Cam Neely card I didn't have on the opposite side was just a bonus. 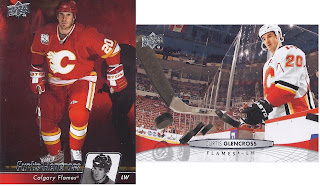 Curtis Glencross might not be a household name, but the man sure can produce a great card. In this case, back-to-back ones from the same company. The latter of the two has incredibly well done depth with the pucks he's knocking on to the ice at the Joe Louis arena. The former might be too red for some, but considering the team, I don't mind it at all. If he was still with the Blue Jackets at the time, I'd be less enthused.

Plus, looking at some of his other cards over at COMC, the action shot on his 11-12 Pinnacle one is also pretty sweet. I'll have to start checking the singles boxes to see if he threepeat with a great card this year.
Posted by buckstorecards at 08:52