One Card Only: Please Punt Me

Today is the perfect day for a football-themed card post, but I'll go really weird with mine. 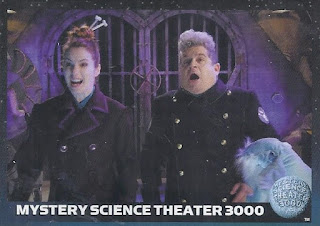 A couple weeks into the new year, I received my two boxes of Series 3 of RRParks Mystery Science Theater 3000 release. The set was a little larger than the previous two, and with it being 400ish cards with only 360 in a box, I decided to practically guarantee a complete set by kickstartering for two boxes.

These go through the most recent episodes of the show, to include the two Netflix seasons. Invention Exchange cards also resumed here, with there being cards to salute those.

So, as I start recapping those boxes over the next few posts, here's the punt bunnies from episode 1111. 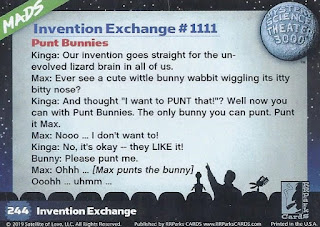 "What a Happy Little Screamer!"

More next time!
Posted by buckstorecards at 08:14

Email ThisBlogThis!Share to TwitterShare to FacebookShare to Pinterest
Labels: MST3K