It's Just a Box Break, You Should Really Just Relax - Part 3

All good breaks must come to an end, including these two boxes of MST3K cards. But here's some hits to take the edge off. 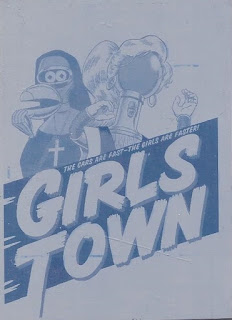 I didn't get any plates in the first two series of cards, but that changed here with a trio of them. Here's the cyan from the Vance mini-poster of Season 6's Girls Town. 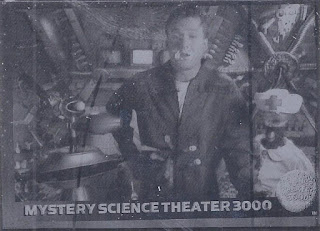 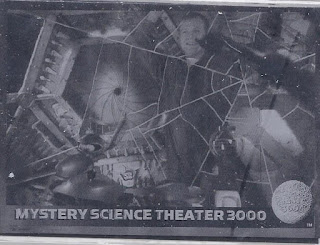 Also Season 10 for plate #3, with the web making it obviously from Horrors of Spider Island. 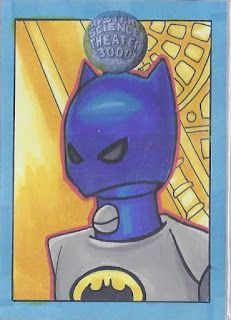 Bat Servo! Even though I am Team Crow, it was nice to get a little bit of variety in my Bot art. This was sketched by Mai Irving, who also drew the P.T. Mindslap card from yesterday. You see, there was some method to my madness of which cards I showed off. 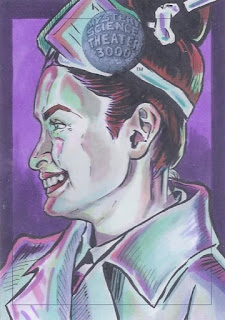 And my first sketch card of one of the humans! This Kinga is by Amanda Pattison, who also did the Donna St Phibes and Growler/Waverly cards from yesterday. Again - method. Madness. 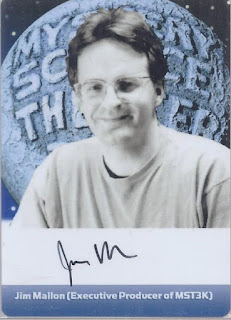 And there were autographs in this as well! Each box contained one, and the first provided a Jim Mallon, who was an Executive Producer, but also provided Gypsy's voice. This is one of the white metal cards, which are the base versions. 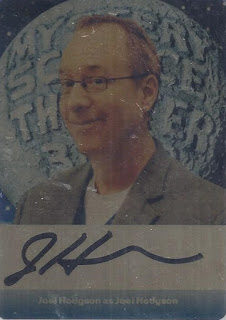 Base versions means that there's parallel versions as well, and I got one of them! And it was of just another face in a red jumpsuit! WOO-HOO! I'm more of a Mike guy, since I work as a temp and feel a kinship. But in terms of hosting, I'm pretty neutral. 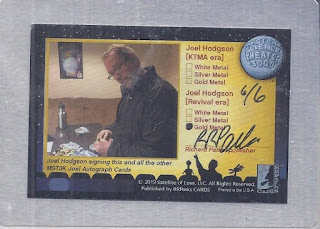 These gold parallels are hand-numbered to 6! And I really like how the certification is done with the photograph!

That was fun! Now I just have to get a binder, and a pile of pages to give these an even more worthy home!
Posted by buckstorecards at 04:40