When In Doubt: Chronicles

Sometimes, it is good to have a box worth of busted cards around when you don't just want to post a single card, but don't want to get to verbose. So, here's another box worth of my favourite 2019 product. 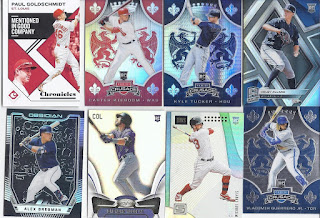 While sometimes you might see two cards from the same design in a single pack, this might be the first time I've received three. But, they are all different parallels, with Vlad being the base design, Kieboom being a holo parallel, and Tucker being the hyper parallel /299. There's also the first of the two Spectra cards that appear in packs without hits. 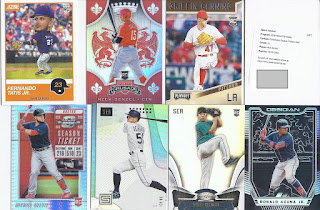 And, there's the first hit. Eventually. The gold parallels are /99 in that set. A big head Score card? Those are always welcome. The Chavis is another Hyper parallel, and like with Crusade is /299. 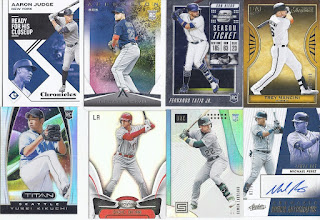 The first actual auto is of Michael Perez, a catcher for Tampa. I hadn't heard of him aside from cardboard appearances. Apparently he was supposed to see more time than he got behind the plate last season, prior to Travis D'Arnaud signing and living up to his original potential. 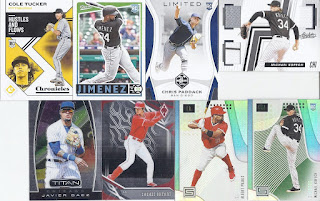 That's really what I like to see with a relic card with multiple windows. Three different designs for a relic. Two plain swatches, albeit different colours, and a pinstripe. Not a lot of variety in terms of teams, with 3 White Sox and 2 Angels cards in the pack. 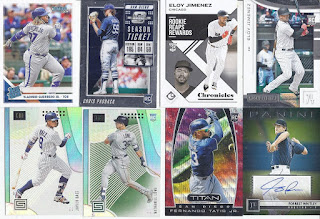 And there's the final hit. And another Chicago-intensive pack. But we've also got Vlad showing up again, and Ruby Wave /199 of Tatis, so not bad at all. 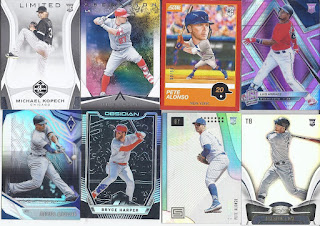 That's a nice way to end it - a Pete Alonso hot pack with both a numbered and non-numbered card. That hot pink of Arraez is also numbered, being /75.

Not bad at all, even if I would have preferred not going back to back boxes with a redemption.
Posted by buckstorecards at 13:31