While I still have to wrap up an envelope from Dennis @ TMV, I figured I'd do this one now. Why? My mailbag, my rules. Today, the mailer dropping off the list is from Brian @ Highly Subjective. 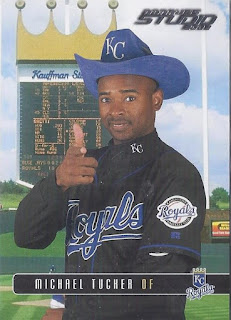 Brian always seems to include at least one card from my most wanted list(s), and this one knocked the wonderfully goofy Michael Tucker Studio card off my list. 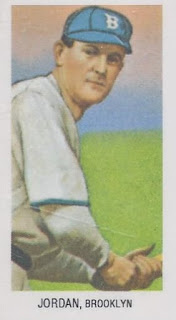 This is a reprint of a card on my not-so-reasonable want list, a 1909 Tim Jordan, bringing representation of the Brooklyn Superbas into the 2/14 collection. What's a Superba?


"Superbas” was the nickname of the baseball team that would later be called the Brooklyn Dodgers (now the Los Angeles Dodgers). “Superba” was the title of an 1890s entertainment spectacle brought forth by the Hanlon family. When Ned Hanlon (no relation) managed the Brooklyn club in 1899, his team was called “Hanlon’s Superbas.” Hanlon was let go as manager in 1905. The Brooklyn team would continue to be called the Superbas until 1910.

So, basically, the Montreal Expos of their time. 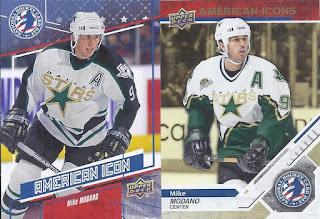 There was even some unopened wax (foil?) in the pack, consisting of two US Hockey Card Day Packs from 2015 and 2017. Each contained a Mike Modano. 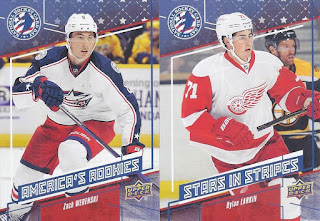 But the 2017 pack also contained a pair of cards that will be outward bound towards Ann Arbor shortly. The rest of the mailer? Mets all the way! I guess it is off to the LCS to find myself a suitable top loader for this. The indigo parallels are /150. 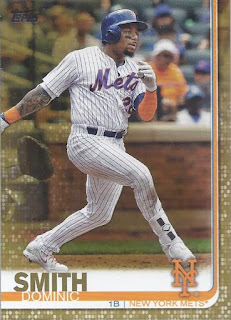 It will be quite a bit easier to find a home for this parallel. It would be hard for a player to have any better final at bat to a regular season than Smith did in 2019. 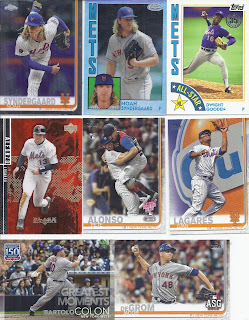 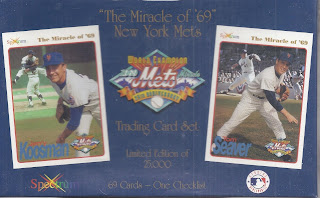 And there's 69 (nice) more in this! But, I'm leaving this sealed for the time being. At least until I get the urge to open it. And that will be a whole other post.