After trying a rack pack of 2014 Contenders, and being not very impressed by the design, it was time to try something else from the Target aisle. I had to choose between Strata and Platinum, and as per the title, I opted for the latter. Fewer cards, but nice and shiny ones.

And here's the first pack. They seem to be broken down at a rate of 1 rookie and 3 veterans per pack. For some reason, the rookie base have the warped quality that you get from 2010 Topps Chrome baseball. The big one here for me is a new card for the 2/14 collection with the Alshon. I just sent out a package to Bob Walk The Plank last week, so the Geno Smith is a perfect pull to start off the next PWE. 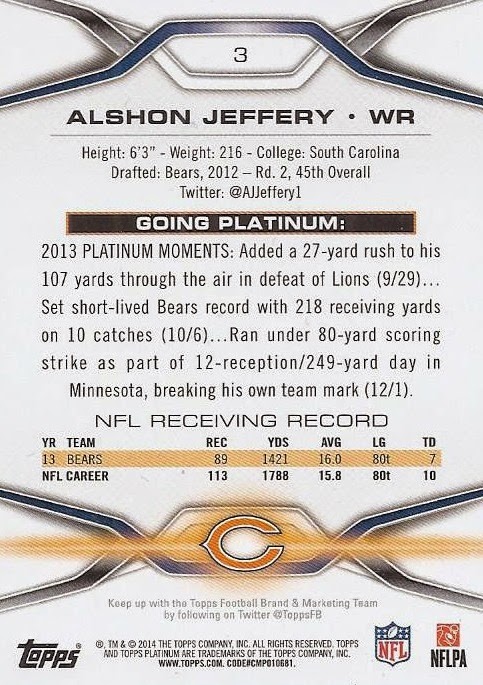 The backs are much nicer here than in Contenders. They are typical for the Platinum football, but at least there's some information on them. Since 2013 was a great year with a pair of monster games for Jeffrey, it is only appropriate that gets mentioned on the back.

Pack #2. That Torrey Smith is a Veteran Blue parallel (or Sapphire, depending on what site you look at), and fell at a rate of 1:24. It is also kinda thick - sorta like a dummy card, but not really a dummy card since it is a box hit type of pull for retail.

Pack #3: 3 packs. One dupe. Ouch. And the Edelman came out with a dinged corner as well. Easily the worst of the three packs.

And there is a bonus here:

A 3 card pack of orange parallels. All rookies, but since this parallel set was only rookies, that's no big deal. The orange looks really good on the Charles Sims card, and really obnoxious on the Evans. I'm not sure why I see it that way. Either way, the Evans, much like the Smith, is set aside for BWtP's next mail day.

I didn't get the volume that I got from Contenders, but like this better, and this would be a more interesting set build than that if I could find packs at a cheap price.

Posted by buckstorecards at 21:17