Catching Up - Part 4 - What's worth more? The case or the cards?

I did come across a new type of repack at the local Target while I was still posting 13-14 Score break stuff. It wasn't in the card aisle, but in the area as you walk in, mixed with other dollar-y merchandise. It featured a 100CT case, 2 packs, and 25 misc. cards. Not a dollar, but $5.00. A little steep for a repack without a lot of stuff, but I figured I should touch this stove at least once. The two packs visible were retail 2009 OPC and 2006 Parkhurst. Blandish, but more interesting than some of the visible Victory and MVP.

I'll start with the loose cards. 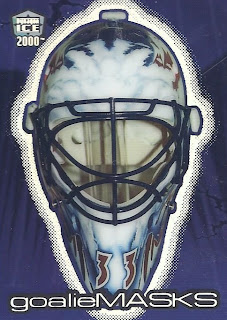 1999-00 Pacific Dynagon Ice #1 - Partick Roy - Masks insert. This was the primary reason I selected this particular repack. This was one of the 2 visible cards in the repack, and I knew this one would fit beautifully in my mask binder. After looking at it out of the case, it had a really nice glossy feel, and I decided to look it up at COMC and Sportlots. The lowest price at either site was $10.00. Beautiful. While I wouldn't pay that price for it, I'll gladly drop half on it unknowingly, and get some repack novelty with it. But I've got my money's worth on the first card, and I've already answered the question if the box was worth more than the cards in it.
2011-12 UD #374 Scottie Upshall 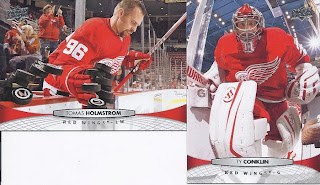 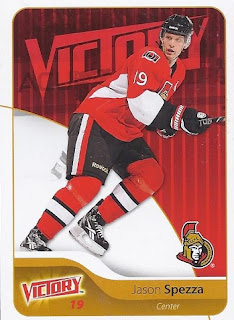 2011-12 Victory #130 Jason Spezza - WOO-HOO! A Sen! Interestingly, it doesn't appear that Spezza has any base cards in this year's OPC set. Although he does have a sticker. Unless my checklist searching deceives me. Which it might. 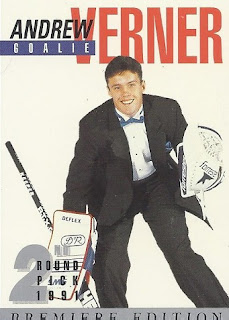 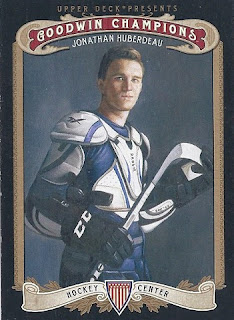 2012 Goodwin Champions #91 Jonathan Huberdeau - Now this was unexpected. At least he's not rocking some of the more amazing fashion 'don'ts' that populate this set.
2012-13 OPC #389 Steve Downie - Another card for my Rangers alumni collection, despite only 17 games worth of play in town. 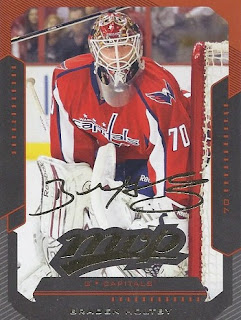 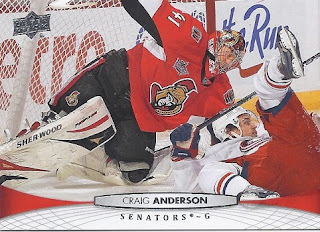 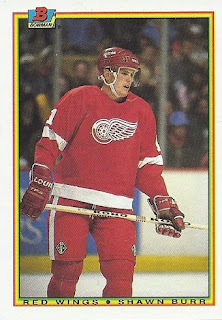 5 1990 Bowmans - A new Shawn Burr for my Rangers collection is all of note about these repack staples. RIP, Shawn. Actually, 3 of these were alumni. Burr, Brian Bellows, and Doug Sulliman. I did need the Sulliman. So, Yay!?
2011-12 Victory #279 Robyn Regher - Truly among the finest NHLers born in Brazil. 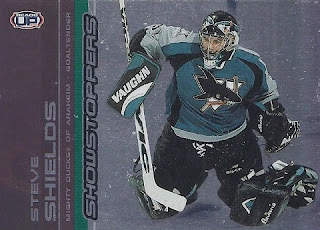 2001-02 Pacific Heads Up #1 - Steve Shields - Another beauty of his Sharks mask for my mask binder. This was the other visible card. Another beauty, although not worth the dollar value of the Roy.

Off to the packs. Age before beauty.

The Parkhurst was another reason I picked up this pack. While the usual suspects appear in this set, there's some nice cards of players who you don't see a lot of anymore. Think the SPs in Archives.

Case in point. O'Reilly's the only one among this crew who have shown up with any regularity in recent sets. 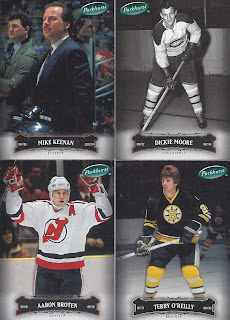 As for the OPC: 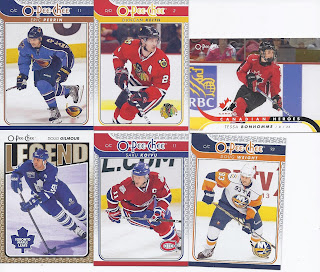 A couple decent names, but national pride makes me pick the lovely Tessa Bonhomme as the best card here. Among other things. Hubba hubba!

5 bucks worth? In terms of book value, certainly with the Roy. In terms of personal value, its a little closer. I'd rather thumb through more cards, but the quality was definitely there with even the loose cards.

Posted by buckstorecards at 14:10