Not really e-pack cards in the case that I bought the packs they were in or traded for them on the platform, just that these were fairly cheap on COMC because of epacks. 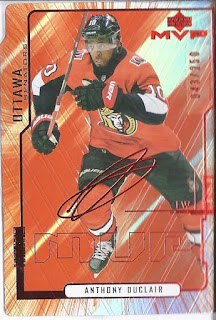 Anthony DuClair's time in Ottawa was too short, but it was a great part-season. A least I've got a numbered card to remember the time by. Maybe if he had a signature distinguishable from Thomas Chabot's, he'd still be around. 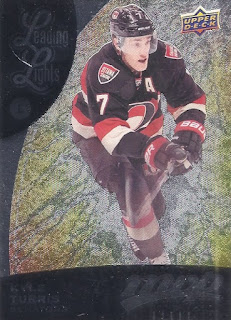 2015 was MVP's first year on epack, and those older cards are still plentiful and plenty cheap. 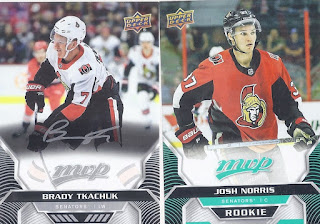 Even as one of the better rookies in the 2020 class, Norris' content is also pretty inexpensive. I'll take any chance to add some of his content to the team collection. Hopefully, Extended's arrival does the same for some Stutzle content. 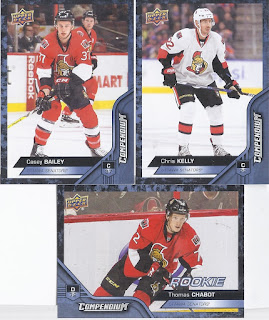 Compendium is always good for adding obscure members to the Sens PC. While Chris Kelly did get plenty of cards from his first run with the team, this was the only content from his second stint. Casey Bailey did  get some AHL cards, but most of his NHL content, other than this, has him with Toronto. And 60 cents of credit is just fine to add more Chabot content in the PC. 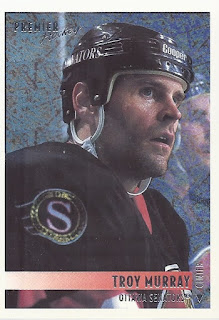 A quick break, as this was not an e-pack card, but still quite cheap and did feature a nice look at the shoulder patch. 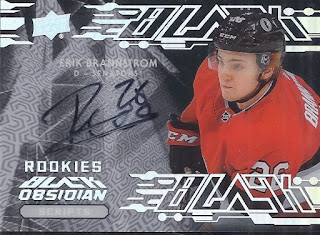 Finally, we have a hit. If I'm going to finally add a Brannstrom auto to the ol' collection, I might as well go for an on-card one, and with a decent design. Thank you, to whomever paid about 30 bucks more for an epack that contained this card than I paid for the card.
There you have it!

Posted by buckstorecards at 08:23