I thought the only thing left in the repacks-to-post box was a cube worth of football. That was a mistake - as there were also 100 cards worth of a baseball repack that I'd busted, and not gotten around to scanning and showing. Let's remedy that the rest of the week. 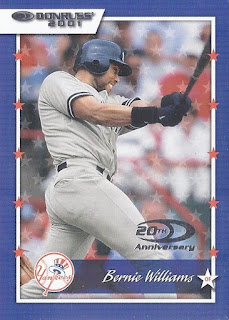 This one was strange. Usually, the opening card is something from a recent base set. Instead, first up here is a 2001 card. I thought this might have been some sort of parallel, but nope, this was just a regular old base card. 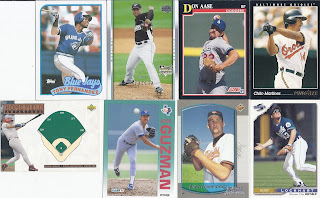 Splitting these into 25 makes it so easy to scan everything. Those Home Field Advantage cards would be a lot nicer in a modern set, especially with there being fewer generically-shaped multi-use stadiums around. 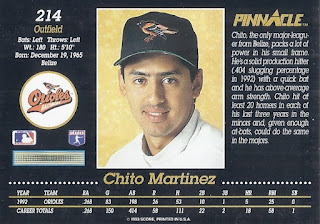 The back of the Chito Martinez makes me chuckle. Just 'Belize'. It is like when the 80s wrestling heels were just introduced as being from 'Japan' or 'The Soviet Union'. Not even a city. 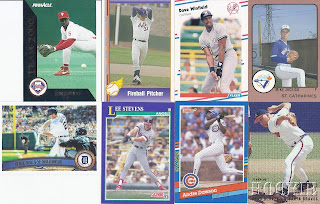 Mets content! Jays content! I feel sorry for the poor guy that has to wear a name that sounds like 'Jock Itch' on the back of his jersey. Looking at the backgrounds, with the Winfield and Stevens, I got a pair of appearances of the old Comiskey. Side-arm awesomeness too with the Clontz, which also sounds sorta like Klutz and isn't the best name for a jersey, but still better than Jockish. 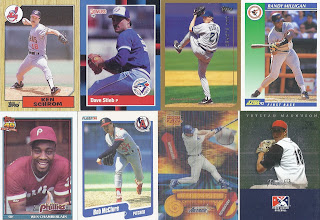 Trystan Magnusson is listed as a Blue Jay on that Tristar card, meaning there were 4 Jays cards in the first 25. Both of the minor league cards were new to my PC. Wes Chamberlain sure looks happy about something. Maybe about making his flagship debut? And Sportflics! Sorry, Sportflix. Typical mid 90s spelling. At least the insert set isn't spelled Detonatorz.
There you have it! 75 more to go!
Posted by buckstorecards at 04:30