There were 3 releases in recent weeks, and I got into case breaks and half-case breaks of all 3. Clearly Donruss, Elite and Select all dropped, and all 3 provided one notable card for the collection, along with lots of base cards to fill up the binder. Let's look at 'em! 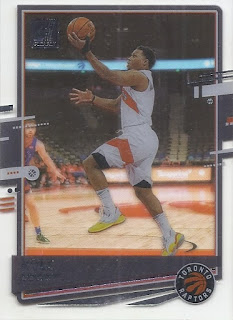 Clearly was the first of the sets, and, as the name indicates, it is an all acetate release. There weren't a lot of cards in the boxes total, so Lowry was the only regular base I landed. All these late-release Lowry cards are gonna be a bit depressing, but there's still so many great memories of the past years in Toronto. 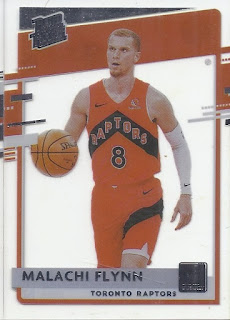 But there was a rookie card to accompany the Lowry in the collection. Flynn's rookie season was perfectly fine, nothing unexpected from the late first-rounder. 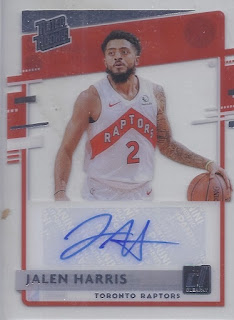 And a first-rounder deserves a second rounder, and there's a signature to go alongside it. This was Jalen Harris' first card this season, and it may be his last, as just before this release, he was nailed with a season-long suspension for a drug violation. But, since I do like to get at least one card of every Raptor who ever got one in the collection, this is a great addition to the ol' PC. Autos are fairly tough pulls in this product, falling one every four boxes or so. 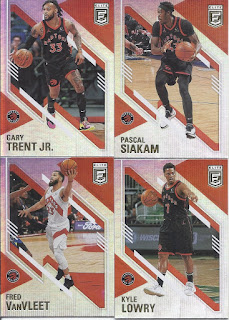 The Elite release shows how up-to-date the new releases can be, as Gary Trent Jr is already in Raptors gear, after arriving from Portland in the Norman Powell trade. 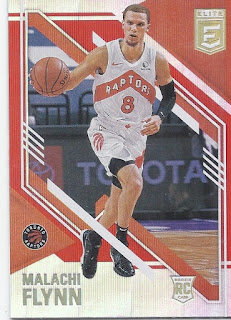 Rookies are SPd in this release. While I got about 5 of the veteran base, this was his only appearance. 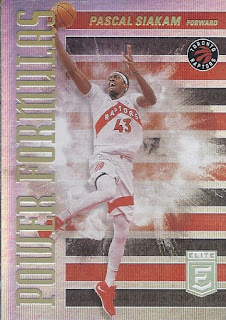 This was the only non-auto insert in any of the breaks. That's a very "Lebron throws the chalk" background. 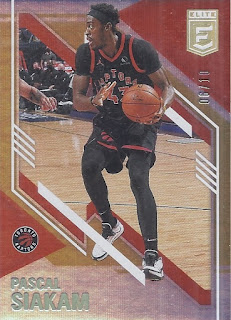 The big hit here wasn't an autograph, but this golden parallel of Siakam, limited to only 10 copies. I'm torn between the thought that gold parallels should be shiny and gaudy, and the simple pleasure that the card scans so perfectly and the photo is not obscured. I think this is now my lowest numbered card of Siakam in the collection, but I'll double check at some point to make sure. 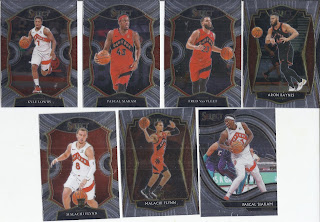 Select wraps it up. That's my first card of Aron Baynes in a Raptors gear, and much like with Harris, I doubt there will be a second appearance. Not because of drugs, but just because he really didn't work out. The red Flynn, along with the Baynes, is a slightly SPd Premier base, and the white jersey Siakam is a more SPd Courtside base. 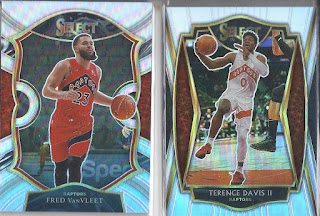 It is all about the shininess parallels here. Strangely, Select was released after Elite, but while that reflected the deadline Powell/Trent trade, Davis' move to Sacramento wasn't in this set. 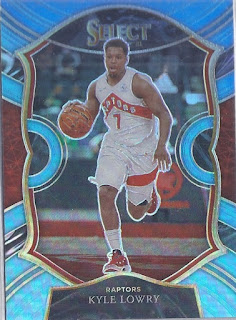 It really didn't scan too differently than the silver parallels, but this is a light blue /299 parallel of Lowry. 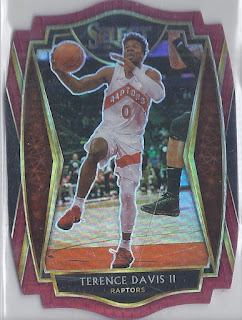 Here's the second Davis appearance, this time on a red die-cut parallel /175.

I've landed an auto of Malachi Flynn in a previous break, along with a relic, so why not combine the best of both worlds for the final card in this post?
There you have it!

Posted by buckstorecards at 08:27