In lockdown mode and with fewer trips to the LCS being made, I'd done a few more e-packs than I should be willing to admit. Mostly hockey when it came to this stuff, but I'd grabbed a couple Goodwin Champions packs as well.
Why? Why not? Who wouldn't want a chance at a Ken Jennings autograph?
Which I didn't get. 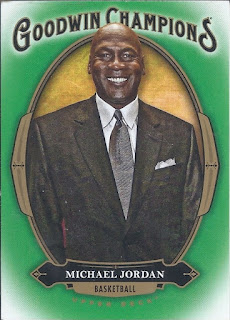 But I did get a Michael Jordan card, and even in e-pack form, it is still fun to pull a Jordan from a product. This is an e-pack variation, and it seems a little rare based on the fact there aren't dozens and dozens of these available on the secondary market through COMC. 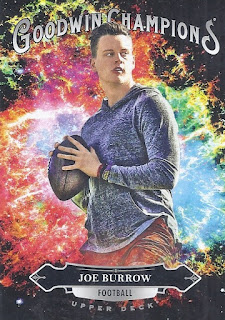 And let's add in a card of the most recent #1 draft pick as well. This is from the Splash of Colour portion of the main set.
For 2 packs, that's a pretty good number of transferable cards. But I did get one more, and these do appear to be pretty rare - listed at 1:1920 packs.
At 20 packs per box, 16 boxes per case, that's about 1 every 3 cases, both in epack and hobby pack form. 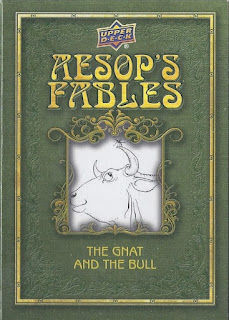 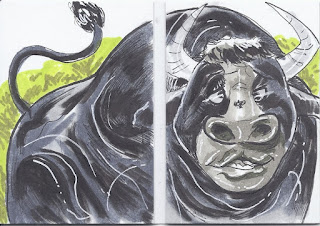 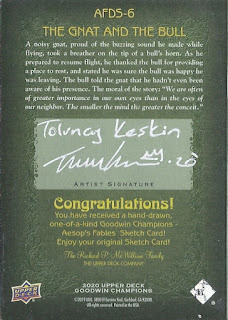 Here's the back of the booklet - and a rare instance where the story appears entirely on the back cover of a book, along with the artist's autograph and the 1/1 text. Outside of 2/14 cards, this might have been the non-sports card I've been most looking forward to having in hand, and it really does feel like a special card. I'll very likely looking for a book specific case in the near future.
And there you have it! I'll be hitting some hockey content next post, including both e-pack acquisitions and cards I got "because they were cheap on COMC".
Posted by buckstorecards at 05:01