Time to start some 2021 Series 1! I usually list everything, but I'm feeling lazy in terms of typing, so I'll just hit the highlights.

I often like to judge how much I'll like the set by the first card out. What is it this time? 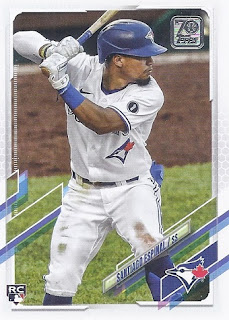 A Blue Jays card! That's a solid start! As for the design, I like the return of full borders this year after a short absence. 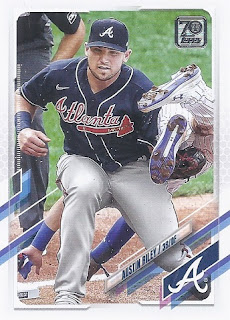 The return of borders doesn't seem to have reduced the quality of photo choices this year, such as this great look at Riley protecting the base from some anonymous pin-striped player. A photo from the reverse angle would make an amazing card for that player. 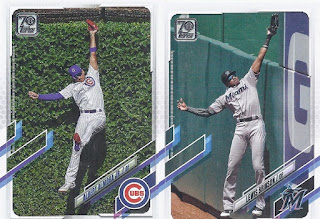 And here's some great photos of catches against the wall. But it is the Almora with the Wrigley ivy that wins this duel. 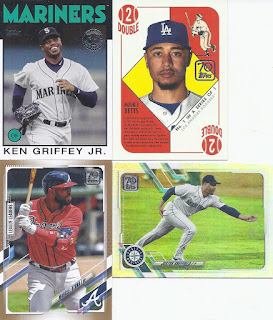 Finally, the inserts. Appropriate that I pull a 1951 Box Loader of  Betts from the bonus pack, and that I also pull a 1951 of Betts from the 70 Years of Topps, as he's leading the way in that insert set as well. The back of the card (which I probably should have scanned, in retrospect) gives some history about the set in question. There's the gold /2021 and the unnumbered rainbow parallel on the bottom. 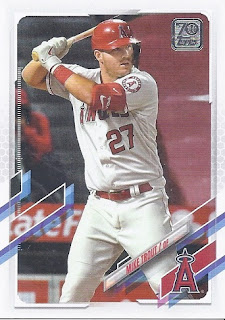 Another really good "first card" in this one. 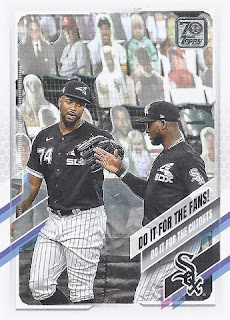 I was expecting Topps to play down the lack of fans in the stands last season with a bunch of closely cropped photos. But here's one that highlights them. Sort of. 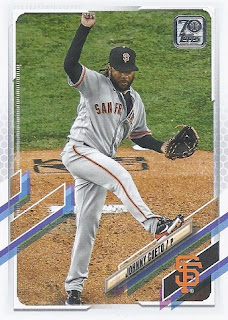 I'm always interest in cards where the photo blends perfectly with the design of the card. It is going to be hard to beat out this Cueto this year. 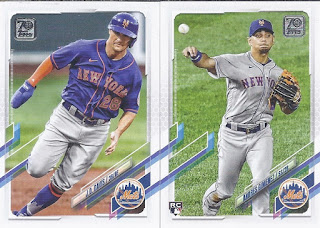 There were no Mets cards in the first pack, but I landed a pair of them in this one. 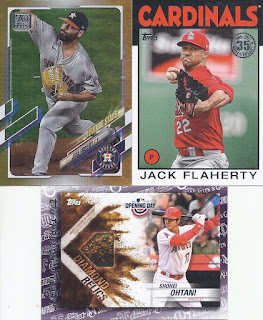 And the final batch of inserts in this post. That's a gold foil insert, not to be confused with the regular gold /2021 parallels. The Ohtani is another one of those historic theme sets, that seems to be annoying collectors when they highlight autographed versions. There's little confusion here, as the card is standard thickness, and couldn't contain the relic.
And there you have it!