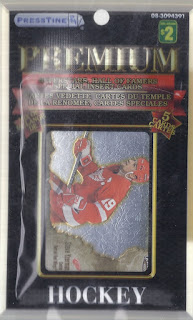 The Dollarama still had a quartet of these Premium packs left, so I grabbed what was left on the hangers there. And here they are! 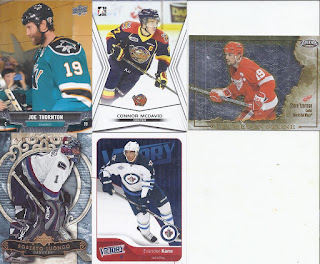 Yet another of those ITG Erie Otters MacDavid cards was hiding behind the Yzerman in the first of these. That Yzerman was from the Etched in Stone insert set in 2002-03 Pacific Exclusive, and has a cracked texture to it. The rest of the stuff is fairly standard base cards, but the first two cards really carried this one. 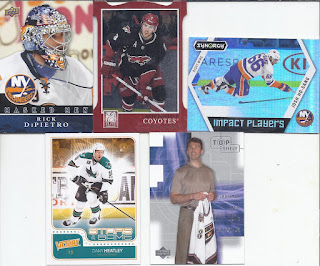 A solid mask binder addition was visible here, and that was only one of the three inserts in this one. The photo of Ho-Sang is from the short period where he *sigh* disrespected the history of the game by wearing Mario Lemieux's jersey number *sigh*. Unwritten rules are idiotic in every sport. The Yandle is not numbered, but is an Aspiration die-cut. Even if you can only see part of the logo on the jersey, that Jagr is better than a bad photoshop or airbrushing. 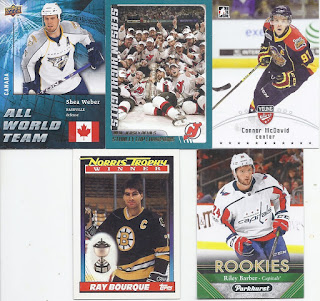 Another Connor in this one, which featured the Shea Weber on top. But, as usual, anything with an appearance of Stanley on the card will usually get the nod as best card, and it easily does here. 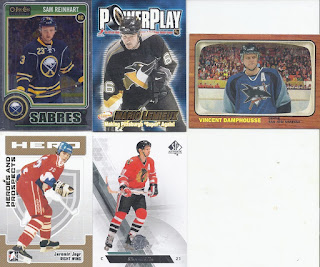 The only one of the four that didn't have an insert on the top was this one, which had that Sam Reinhart rookie our of Platinum. Something I didn't notice at first, and only when I looked it up as I was writing this, is that this a green frame variation, and easily the biggest card in the bunch in terms of resale value. Along with that, there's a pretty sweet 1966-ish Heritage card in there, with another 3 big names. Even without the variant, this would probably still have been the most consistent of the 4 repacks
There you have it!
Posted by buckstorecards at 11:00