I hinted at this in the previous post. The box of the new Trilogy release was my actual goal while in the LCS, I just happened to get an Alshon Jeffery base card to go along with it. 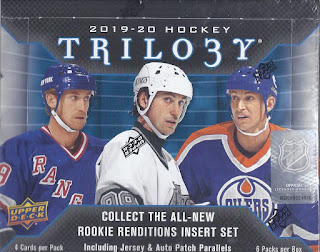 I like the box design. I just wish they'd also varied the Gretzky photos used on the packaging - they only had the Kings photo.

This continues the tradition of not getting 4 cards if you get a relic card. It looks like I lacked the regular base card in this. The Jones is technically a base card. There are three levels for those, with this being the middle level. 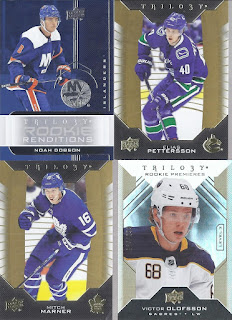 There's some more base cards. And that Olofsson is an example of the least common, Level 3, base rookie. Olofsson cooled down a bit after a hot start to the season, much like the Sabres themselves. But that's still one of the better rookies in the product. 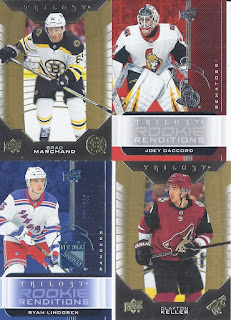 A rather bland pack highlighted by a Sens card. 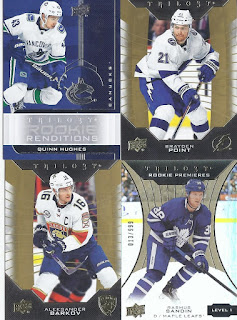 I know a collector in Ann Arbor that will like that Hughes insert. I landed all 3 Levels worth of rookie cards in the box, with that being the most common of them. The closer the cropping, the rarer the cards.

Only 3 cards? Bring on another hit! 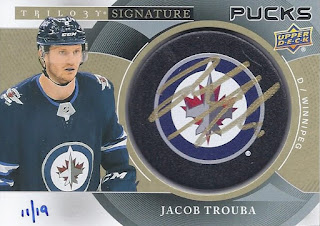 And another card bound for Ann Arbor.  If you can't pull a hit for yourself, you might as well pull a nice one for a trade partner's PC. And this is a pretty nice one, with it being SPd to a hand numbered 19. The most common puck autos are blank pucks, with the logoed ones being much rarer. It probably loses something by being a Jets card in a 2019 release considering how he departed the team, but I know this will still be given a good home.

And at least there's a hit for one of my PCs.