While I was grabbing a hanger pack of Hoops earlier this month, I also grabbed a couple of hockey hangers. They're pretty basic, featuring a couple packs in a hanger for $1.29. Or $1.39. I really wasn't paying that much attention. 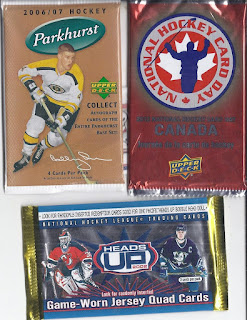 Here were the three packs of cards. There was also a pack of 18-19 Panini Stickers with the Heads Up. I will work backwards through these. 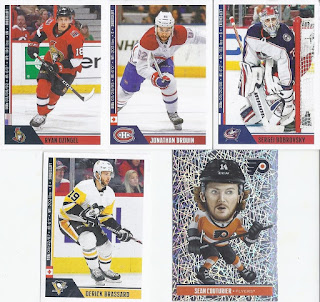 A Sens card...sticker in this, and some shininess. That's fine, even if Sean Couturier looks like a human bobble head. 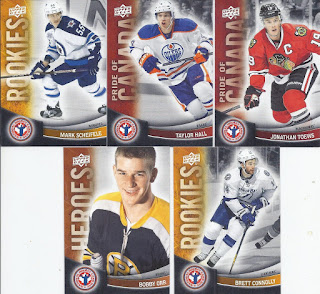 With a 15 card base set, you'd expect some star power in the Hockey Card Day pack. You'd be right. No complaints about a new Bobby Orr addition. 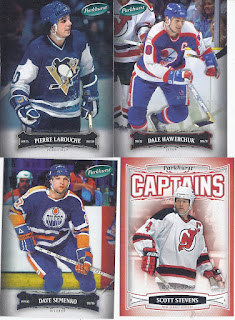 While these single packs of 06-07 Parkhurst have been pretty good for landing autos, that wasn't the case here. Still, this is a cool pack with a numbered addition to my Kitchener Ranges alum collection, along with Pierre LaRoche looking great in those blue Pens jerseys. 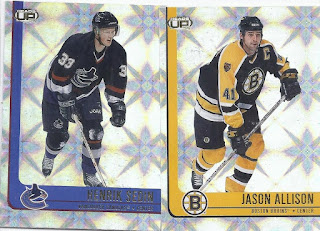 I don't think I'd ever busted the Heads Up before, even though I've added random singles to the collection in the past. I'd certainly remember getting more than one of these cards in the same pack. 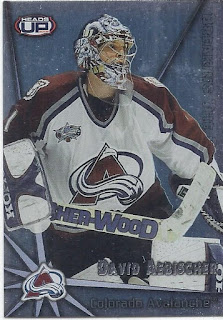 And there's an insert as well! These 'Breaking the Glass' ones fall 1:25 packs, so that isn't too bad of a get from a random repacked pack almost 20 years in the future. Even though this more of a chrome card, without any real glass, or even breaking element to it.

And there you have it!
Posted by buckstorecards at 03:30