I wasn't really planning to do this, but when I landed the Kawhi autograph a few months back in a group break, I decided to go for it. Inspired by Jeff @ 2x3 Heroes' Project 2005 for the White Sox, I'm going to acquire an autographed card of each player that got a ring for the 2019 World Champion Raptors.

There are three players without autographed cards, Chris Boucher, Malcolm Miller and Eric Moreland. Of those, only Boucher seems a possibility of getting one at a later date.

I have most already, and have Ibaka, Lin and Meeks ones in my COMC inventory now. While I'd prefer them in Raptors colours for the card, it isn't a necessity, or even feasible for some. Such as this: 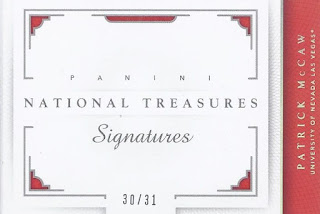 Patrick McCaw spent 3 seasons in the NBA so far, and thanks to moving to the Raptors from the Warriors, got rings in all three seasons. If I cannot use a Raptors card, my second choice would be a college card.

And this is pretty nice. Low-numbered, with a pair of three colour swatches, and a better signature than most of his. He'd later shorten his to initals only, so this full name auto is a bonus. Storage might be an issue, but this is a perfect addition to the collection. 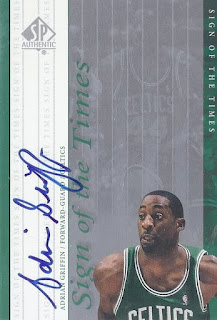 While I don't plan to make an effort to get coach autographs, if someone is an ex-player, and has one, I'll welcome it. Adrian Griffin got his ring, so he qualifies. And here's his entry.

I'll have a few more to show off down the road once I hit ship on my latest COMC order. The only need for me now is a Marc Gasol, and the only reason I have not added one of his is that I'm holding out hope he'll have a Raptors auto available instead of a Grizzlies one.

There you have it!
Posted by buckstorecards at 03:25