After coming off a case break, I'm going to slow things down with a one-card-only post. This is my second card with a tie to my favourite usual on-in-the-background TV show. Unlike the first, this needs more of an explanation. 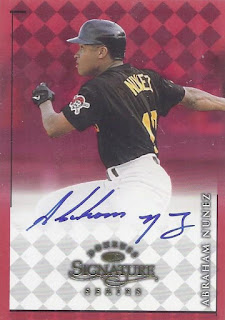 To get why I'd get this card as I tie-in, you'd have to watch the episode "The Gambler".
The murder revolved on a bet that ended up not being placed on a game between Cleveland and Pittsburgh, that ended on a walk-off wild pitch in 15 innings. When I saw that portion of the episode, I figured out that type of ending had to be pretty rare, and finding the game in question would be easy.

Nunez started the 15th inning with a triple, then scored on a wild pitch. So, his hustle on the basepaths ended up leading towards a triple murder.

Next time, just stay on second.
Posted by buckstorecards at 04:12