For my birthday, instead of a box, I treated myself to a case break of Series 2, and add a whole bunch of new cards to my Sens team collection. Let's check it out! 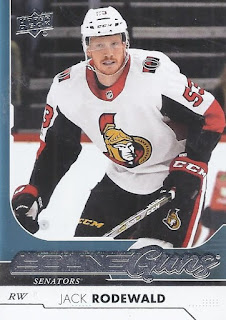 This was the big one for me. Even better, I got two of these Jack Rodewalds for the collection. One for the Sens collection, and the other for the 2/14 collection. I hinted yesterday that I'd have new candidates for the binder within hours, and he's the first one. 4 games in the NHL earned him his Young Guns card.

The Sens are pretty loaded in the set, with 4 cards among the 49 Young Guns. Only Jaros is making his first appearance in my collection, though.

The only veteran content I got was the 1.5 cards among the canvas cards. I'll assume the constant Karlsson to Tampa trade rumours are just a coincidence given the checklist.

Logan Brown and Alex Formenton, who were Young Guns in Series 1 make their first series 2 appearances on the Portraits insert. Brown joined the Kitchener Rangers at the OHL trade deadline, so he joins Rodewald in having two binder homes.

Familiar faces on the O-Pee-Chee update portion of the inserts. Seeing how prices on these fell once the e-packs went live the past two seasons, I'll probably pick up this insert set to truly finish off my OPC set build. Plus, there are no massive rookies in the update set that weren't in the original release with McAvoy and Boeser already out. 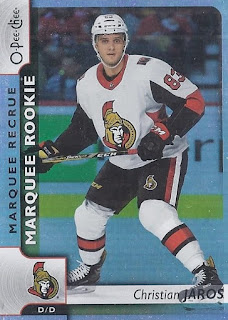 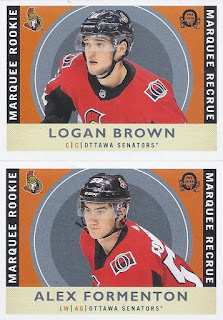 And the retros. Two out of three ain't bad! 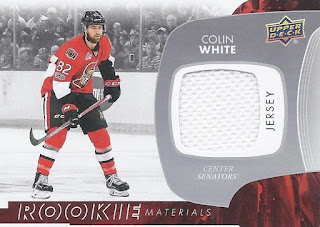 And a hit! Normally, I wouldn't be too crazy about a plain white event-worn swatch, but for Colin White, it works!

And there you have it!
Posted by buckstorecards at 10:25