When picking up the hobby box of 2017 Score FB with my latest COMC credit to blowout credit cash-in, I threw in a few other boxes with it. You'll see those over the next few days. 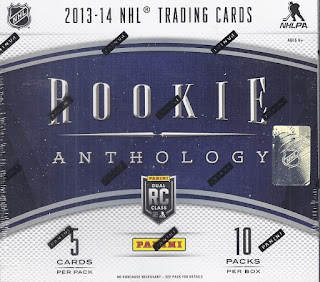 I'm going to go through this group of boxes chronologically, and that means I'm starting with my comfort food, a box of 2013-14 Rookie Anthology. 10 packs - 5 per post. Let's go through the first half of them, skipping the base cards. 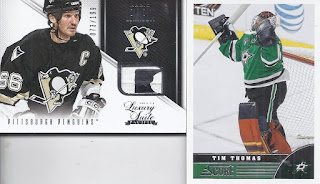 It is always strange when the first pack contains what will likely be the best hit of the break, but that seems like the way it is going to be with a friggin' Mario Lemieux stick coming out of the first pack. If I had the desire, I could probably search Mario cards and see if I can find out approximately when the card is from, given the portion of the CCM logo visible on the front. 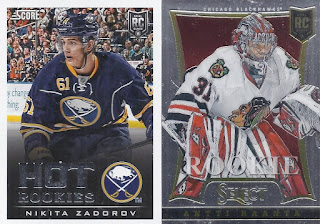 As expected, a step down, but at least both of these guys are still in the league. In fact, Raanta seems likely to be the #1 guy with the Coyotes this season. 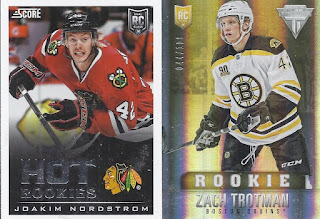 The second thick pack of the break produced this draft position rookie of Zach Trotman. He wasn't the 100th pick, that's just where the numbering maxes out here. He was 210th, which really means that any playing time in the NHL is a bonus. Both guys also sport #42 in the photos, which seems to be an odd collation quirk. 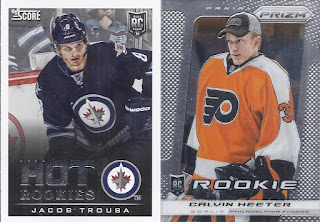 At least I gained another card to fatten my next TMM mailer. 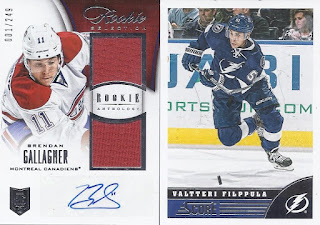 Hey! That's another pretty good card from this box with the 1 per Rookie Selection. I pulled a Galchenyuk when I busted a case of this stuff, and this seems like the perfect card to pair with it.

Excellent start to the box. The remaining 5 packs will have a hard time matching this.
Posted by buckstorecards at 04:08