Not really an insomnia special pack break nor a migraine special pack break, as it was already scanned and ready to be posted later today. But, since I'm awake and sorta coherent, I'm posting it holy crap o'clock.

A retail pack of Score football that had been awaiting posting for about a month. Let nobody say I can't procrastinate with the best of 'em. 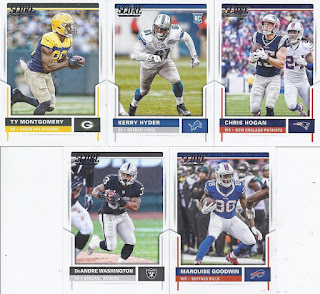 The first 19 cards a veteran base cards. Notable here were the throwback uniform, Kerry Hyder's first card (coming into his 4th season, the first two being practice squad time), Chris Hogan torching his former team, the dirt infield still visible in Oakland, and a Bills card.

Some parallels. At least I know one of my trade partners will like that Peppers. 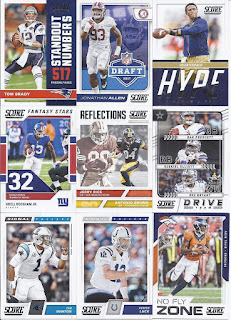 Inserts. For a 40 card retail hanger, they may have overdone it a bit with these.

Just a smidge. 12 inserts, along with the 3 parallels, seems to be way too much for a set-building set's retail options. I got more basecards in the 40-card hobby pack. 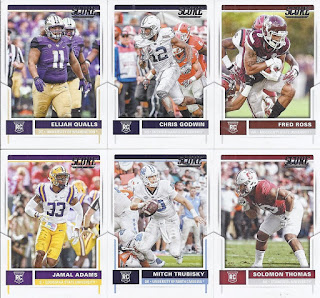 But the rookie portion was pretty good, at least in terms of positioning. The bottom row has the 6th, 2nd and 3rd overall pick respectively. As for the rest, Qualls was a 6th rounder to Philly, while Godwin went to Tampa in the 3rd. Ross was undrafted, but went to the Panthers.

And that's some retail football.
Posted by buckstorecards at 01:03