My original plan today was to post a sampler of cards from the few packs of Ginter I picked up at the LCS today. And post a taste of the packs as a Ginter Sampler of sort. I kinda regret going full bore on Heritage since the Ginter did have a really nice design to it. But, I made my bed with Heritage, I'm still sticking with it. So, with Ginter on mine and everybody's mind, I'd join the masses in posting their cards from that set.

However, I also opted to grab a pack of the new Panini Prestige football.

And I pulled what will likely be my best pull from one of these Just 1/2/3 packs things I've been doing. To remind you, I've pulled autos of Jorge Posada, Graig Nettles and Manny Machado from GQ, Archives and S2 respectively this year while sampling packs. 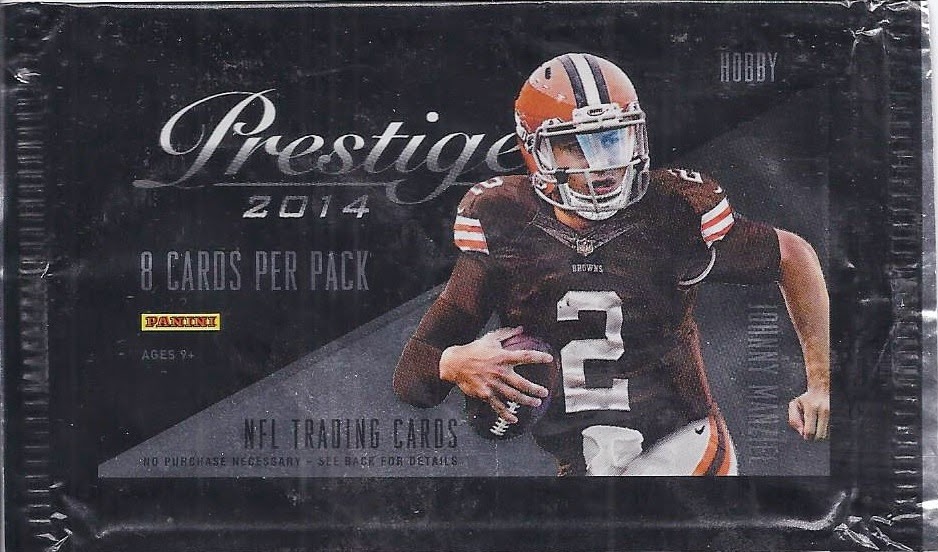 Here's the pack. It's definitely not the most colourful design of the year. 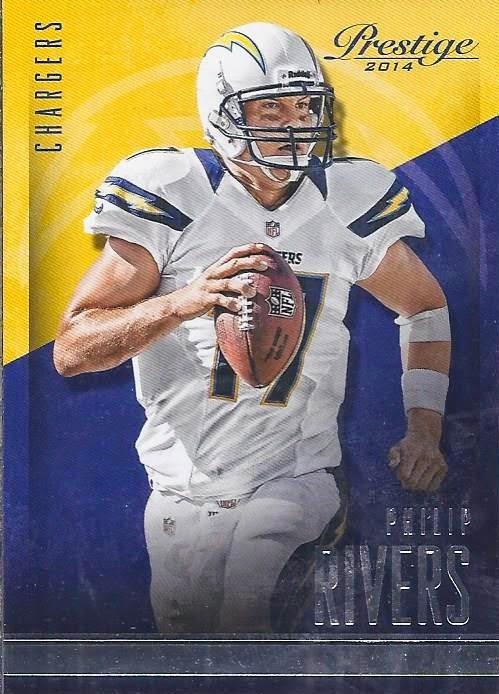 But the cards are nice and colourful. It is hard to tell with the yellow being the upper colour, but that is the Chargers logo behind him. 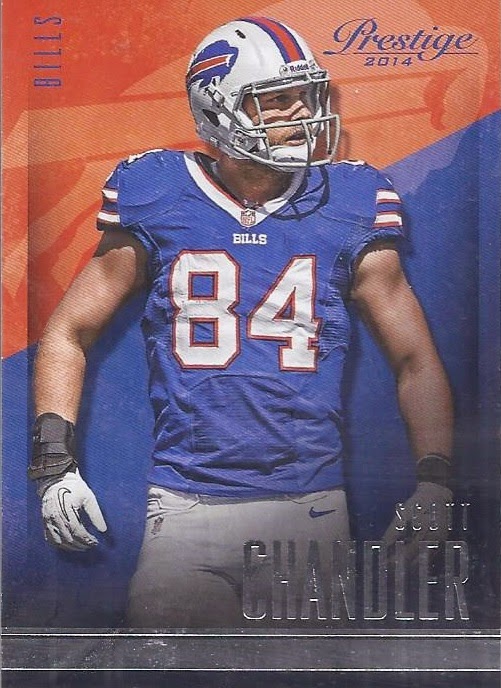 This one pack of Prestige netted me more Bills cards than the multiple packs of Score or the jumbo pack of Bowman. The logo in the background shows up much better here than on the Rivers. And hey, it is a Bills card. This is automatically my favourite football pack of the 2014 releases so far. 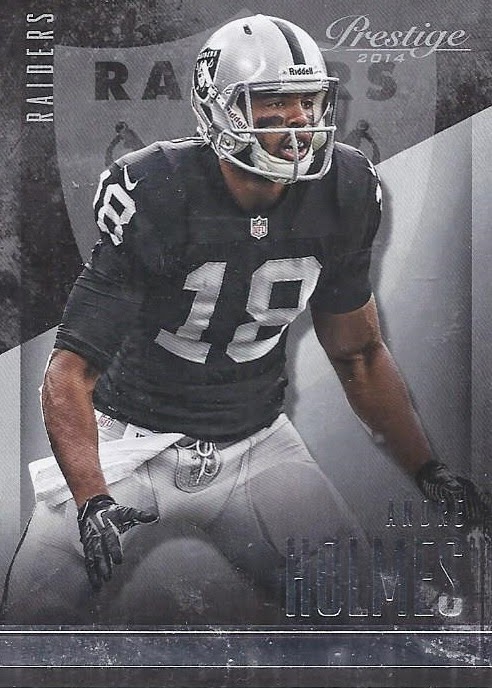 The good thing about this card is you can't tell how badly I need to clean my scanner. And now, what will probably be my pull of the year: 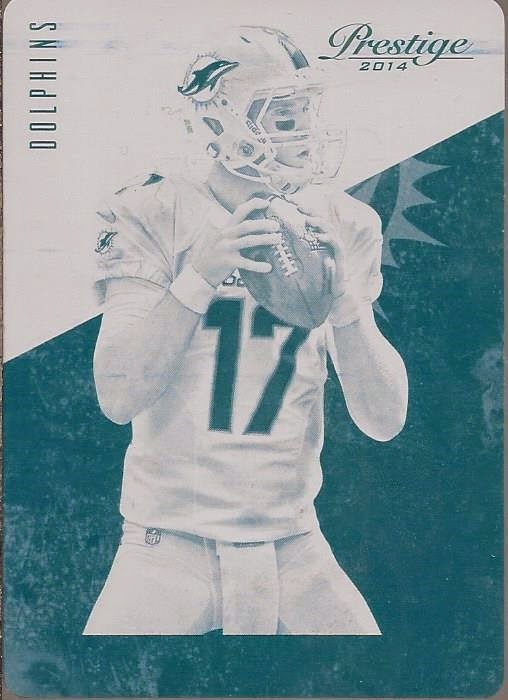 Yes. This is the first 1/1 I've even personally pulled from a pack. Since the name apparently wasn't part of the Cyan plate, it is Ryan Tannehill. These can be a crap shoot at to how much of the design shows up, but I think I did pretty well here with the Dolphins design. Even though as a Bills fan, it is not one of my favourite teams. I've gotten a few black printing plates in trades/purchases, but this is my first one that is any other colour. 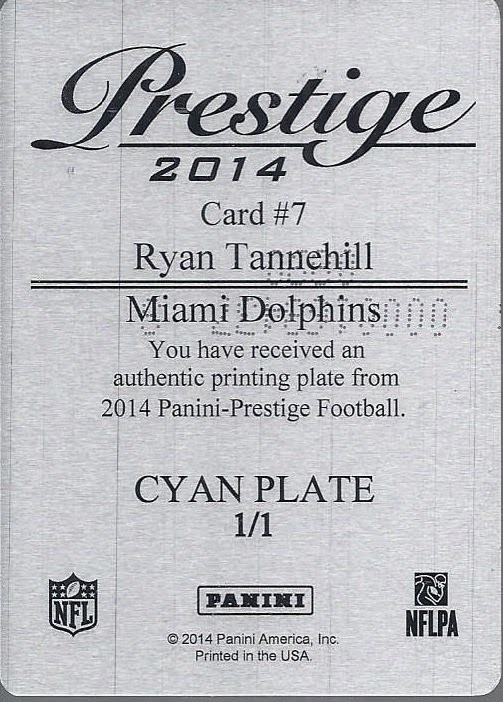 Here's the back in all its 1/1 glory. I'll call it trade bait for the next week or so for any Dolphins/Texas A&M fan that wants it. Otherwise, I'll ebay it. 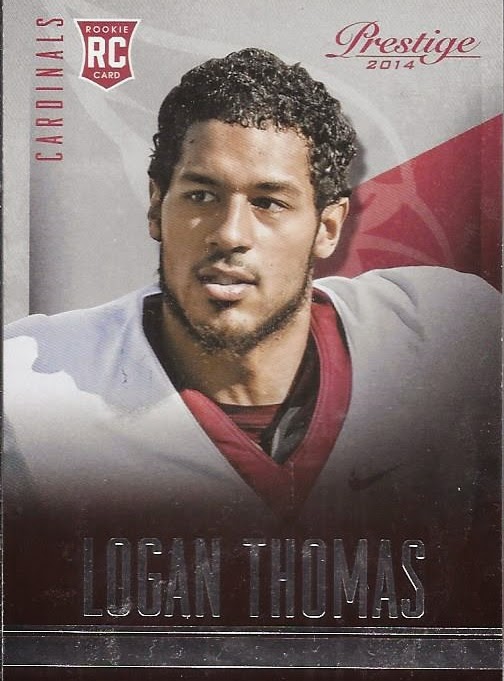 It's kinda moot after the 1/1, but here's the rest of the pack. Other than the RC logo, there's no difference in the design with these and the veterans. 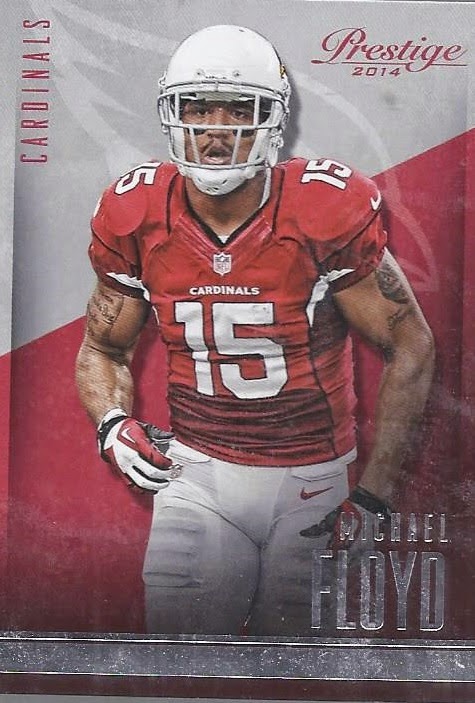 Back to back Cardinals. 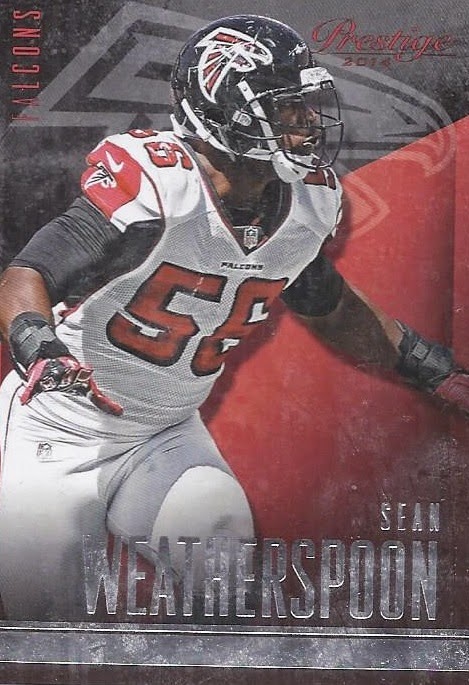 The team logo design really pops nicely on teams with the darker colours. 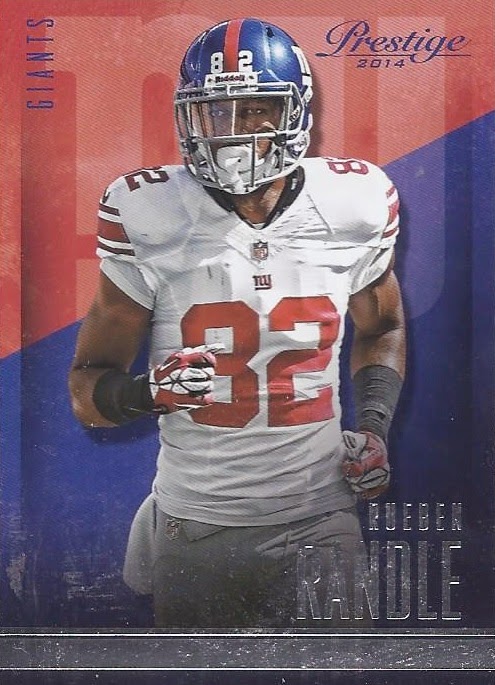 And this one gets wrapped up with this card.

Even though it isn't someone I really wanted one of, it is hard not to get excited about my first actual 1/1 pull from a pack. And now I have one more 2014 Bills card that I had prior to picking up this pack. I guess that's worth letting the Ginter goodies wait until tomorrow.
Posted by buckstorecards at 14:14