Nobody has ever accused me of being the most observant person out there, so the arrival of Upper Deck Series 2 completely slipped my mind.

Until I saw some tins in the card aisle at Wally World. I really didn't want to drop the money on one of those, but a rack pack would suit my just one pack perfectly. Traded guys. Guys saved for series 2. And so on. Here we go! 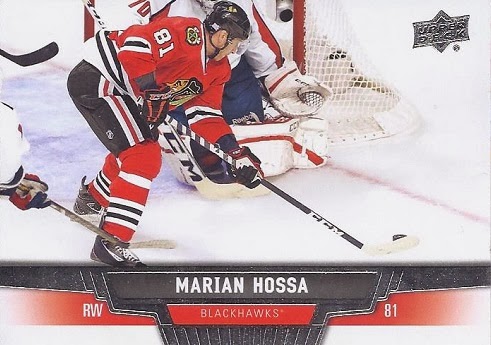 Marian Hossa - Starting off with a nice photo. 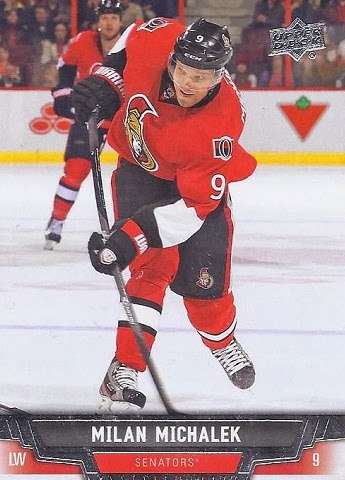 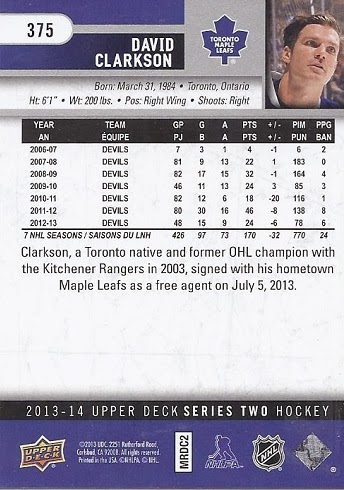 David Clarkson - How would one make a Leafs card interesting to me? Include a reference to his time with the Rangers on the back. Although he didn't just help Kitchener win the OHL Championship, he also helped them win the Memorial Cup.
Vincent LeCavalier
Drew Doughty
Jonathan Bernier
Brad Richards 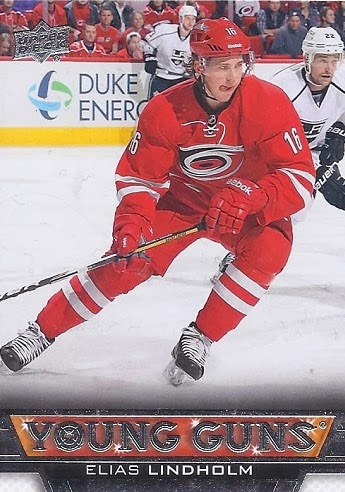 Elias Lindholm Young Gun - Not a bad YG to pull. He went 5th overall in last year's draft, and has seen the ice quite a bit so far this season. They fall at a 1:4 rate in the rack packs. 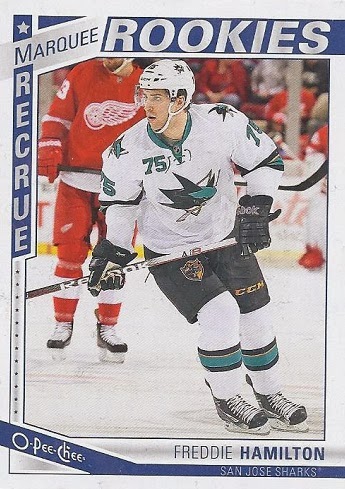 Freddie Hamilton OPC Marquee Rookie Update - I guess the OPC update stuff will be in here. Supposedly, these fall at 1:7. 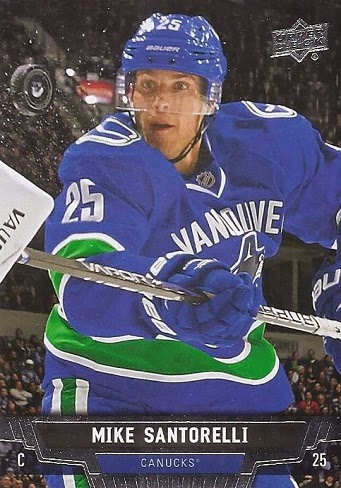 Mike Santorelli - A nice close-up with his eye on the puck. My favourite in-game photo of the bunch.
Erik Johnson
Scott Gomez 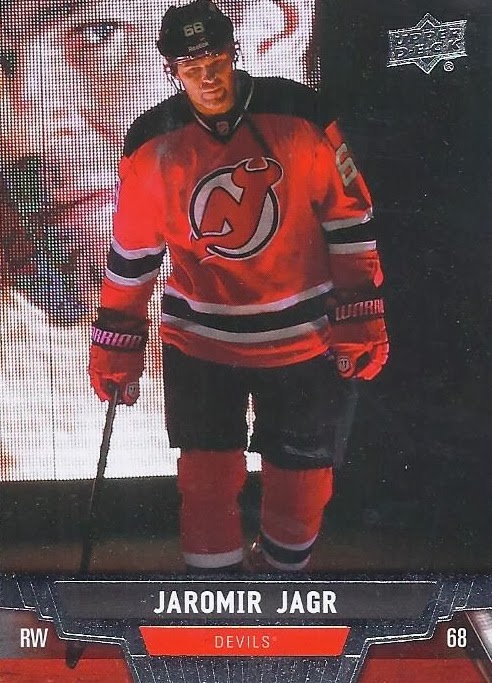 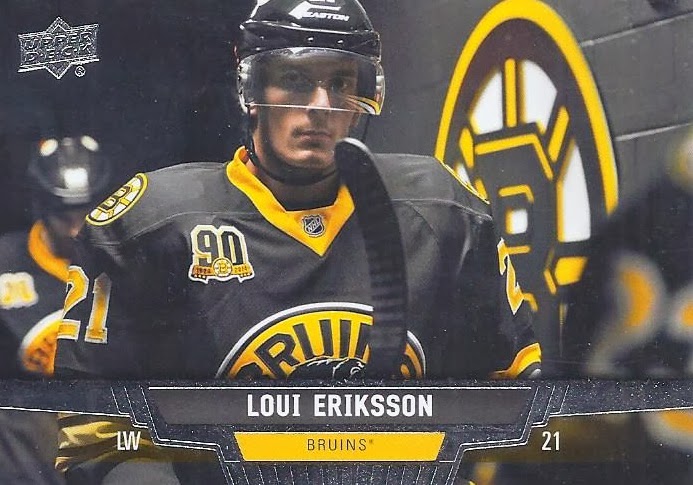 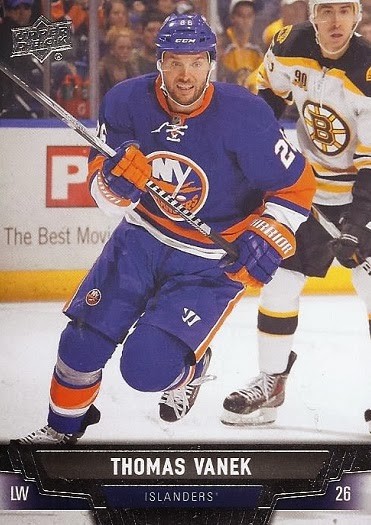 Thomas Vanek - There aren't going to be many card of Vanek in Isles colours.
David Jones 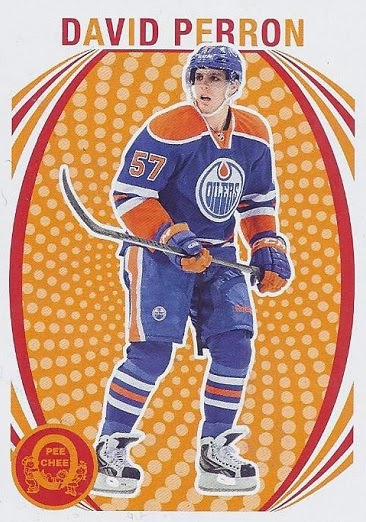 David Perron OPC Retro Update - Supposedly, these are also 1:7. But, getting two OPC Update cards in the same rack pack kinda makes me think they're a little more prevalent. They're as loud as they appear in the scan. EDIT: They're actually 1:42 in rack packs, assuming I can read correctly the second time around any better than the first. 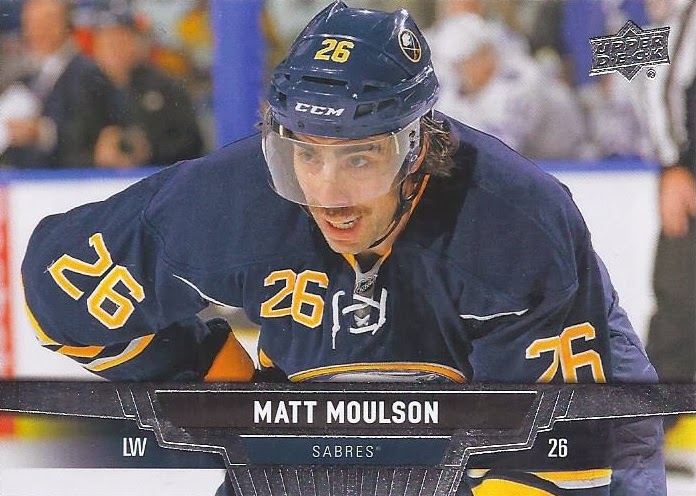 Matt Moulson - See my comments for Vanek. Sub in Moulson and Sabres. 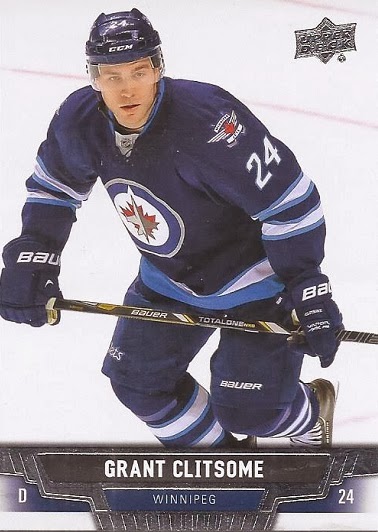 And that's it. While I would have been really happy to see my Young Gun card be either Ottawa's Cody Ceci or Anaheim's John Gibson, I'm still pleased with the pack. Nice photos. Trade bait. PC guys.

And that hideous David Perron.
Posted by buckstorecards at 09:48