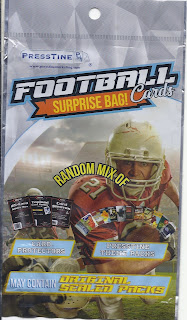 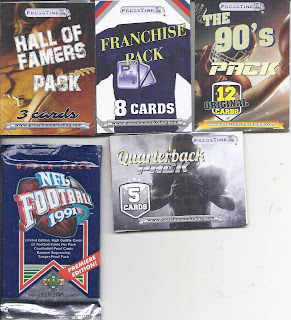 And  these are the contents.

I guess when you start with a HOF pack, you're going to get some nice names. Even better, the cards aren't a bunch of early 90s cards. That Phoenix of Ronnie Lott looks like it could be a shiny parallel, especially with the background, but it is just the base version from 2016. When a Prizm card is the least interesting one in there, that's a fun group. 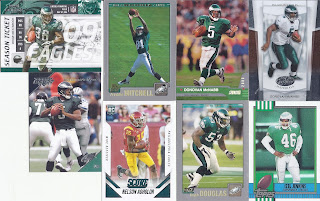 The franchise on the Franchise pack was the Eagles, and by looking at this, they apparently only had 1 quarterback over the entire run of the team. Lots of goodies for a future mailer to Cards on Cards! Although I might keep the Contenders card - I'll always be a fan of the ticket-themed design. 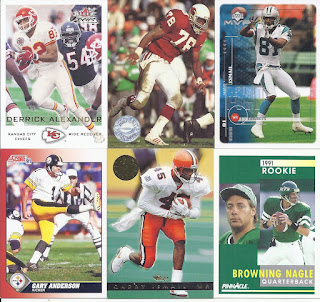 That Derrick Alexander to start turns the 90s pack into a lie. It is from 2000. But the photo is from the 90s, so it is only a half lie. And since it is bound for Ann Arbor anyhow, it doesn't matter. Interesting collation provides a pair of Ismails Kicker card! And a name worthy of the East-West bowl, if it existed in 1991 - Browning Nagle. 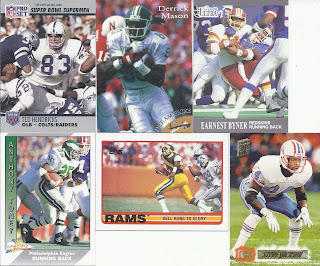 We step out of the 90s for a second time in this bunch - the Greg Bell comes from 1989. Derrick Mason isn't too bad for a rookie year card, even if the licensing seems questionable. "Genuine Article" indeed. He did have a very solid 14 year career. 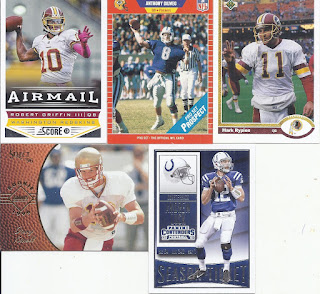 The QB pack was 'blah', and would have seem a lot better if you'd busted any pack in 2012 and found the names Griffin III and Luck.  Instead I'll marvel at how the Dilweg card looks like a photo of a photo of a photo. 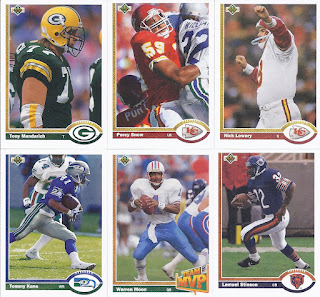 And your UD pack. There's a few of my favourite football card things in here - there's an OL card, there's a  kicker card, and there's a defender with the ball! Unfortunately, that's offset by Tommy Kane, convicted killer. 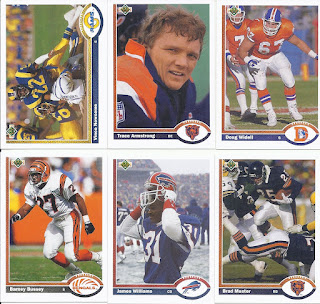 Infield dirt, and a nice Buffalo weather card highlight the second half. At least nobody here murdered their wife. At least as far as I know.

And, best of all, I can turn the cards over and get more photos of defenders with the ball. Stinson ended up with those photos on both sides of his card, and a sentence saluting his prowess at intercepting the ball.
Even with a murderer card showing up, that's a fun break! There you have it!
Posted by buckstorecards at 11:30