And some more Chronicles, courtesy of a half-case random. I ended up with the New York Giants spot, which, for a  rookie intensive product, meant I'd probably be drowning in Kadarius Toney cards. And that was an easy prediction. 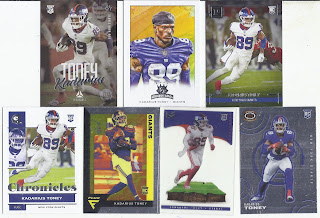 He may not have had the most amazing rookie season, but he was still a first round draft pick, and there's always the potential there. The top row and base card are all designs I'd gotten cards of previously in the one pack I'd opened, but the other three, Flux, Magnitude and Dynagon  are all new. Flux and Magnitude are looks making their football debut, in fact. 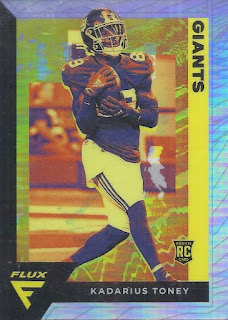 Shiny cards are also available, and these scan so much nicer than the regular base cards, which only serve to show how filthy my scanner bed is. 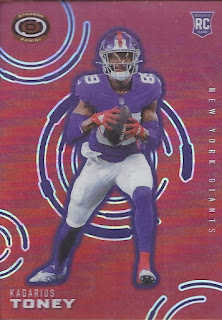 While the Flux parallel wasn't numbered, this one was. Coming in at /99, these red parallels are almost perfect for a Giants card. Not as perfect as a blue parallel, but still really close. 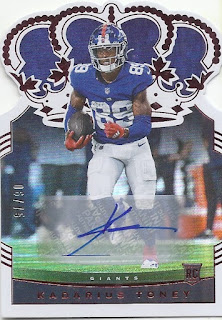 He might not have much of an auto from an aesthetic point, but it is still an autograph. 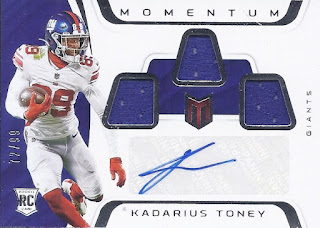 If you want some player-used swatches to distract you, here you go! 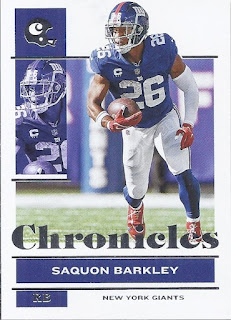 And if you want to see a card of a player not named Kadarius Toney, here's something for you as well.
There you have it!

Posted by buckstorecards at 10:22