I Messed Up Again

Last week, I lamented  that I missed a new 2/14 guy in my COMC to-be-posted box. I managed to top that, by missing 2 Bills cards in there. So, like with Doug Peters, these two get their own post. 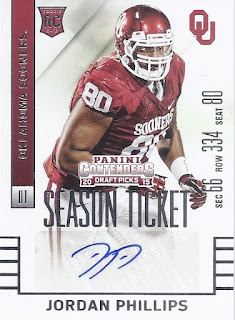 OK. This technically isn't a Bills card. If this card were associated with any NFL team, it would likely be the team that he started with - Miami. Yet, I'll call this a Bills card because he has none with the team, and the NCAA card will always do in a such a situation. He's on his second go-around with Buffalo, so I might as well add something of him. 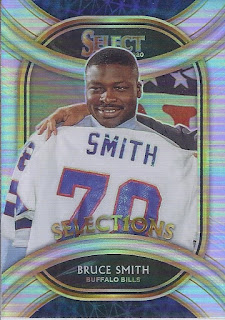 And this card I messed up twice with. Not only did I not post this when I did a Bills post, but I also messed up by writing that I had already posted this when I posted the Jadeveon Clowney card from the same insert set in a 2/14 post. But now I'll remedy this by showing off a shiny draft themed card of BRUUUUUCE!
There you have it!