When showing off some Bills cards out of 2022 Legacy, I mentioned getting into a couple randoms of the product as well. The Colts and Saints were the teams I landed in those, and I'll start showing these off with this post. Colts comes before Saints alphabetically, so they get the lead spot. 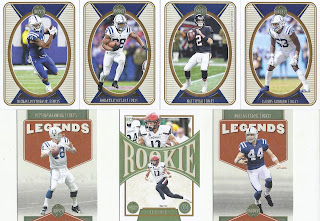 7 cards is a little above average for a base set in a 200 card set, but this is all of them, but Matt Ryan's move to the team probably put them at the level, even if he didn't warrant the photoshop treatment. Dallas Clark seems like a random inclusion for the Legends portion of the set, but I won't complain about any extra cards. 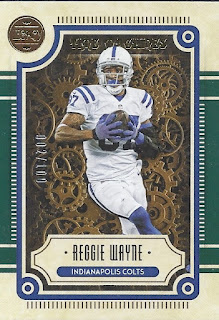 Reggie Wayne would seem a little more logical as a member of that subset, but he also got an appearance in this Time Machines insert. This one is the green parallel, /100. 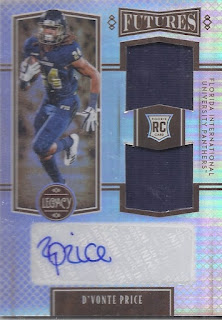 This spot really came through when it came to auto/relics, with this being one of three of them I landed. While Price was undrafted he still signed with the Colts and is on the Practice Squad, so this counted as a Colts hit. His signature is decent enough as well, and I can read his last name. That's enough to probably place him in the upper portions of legibility in this rookie class. 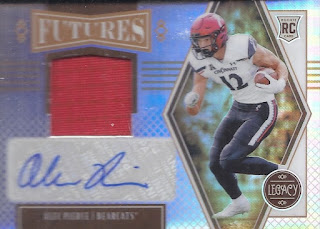 Here's a drafted player. The scan is a little (lot) rough, but this is Alec Pierce, who was the first player selected by the Colts, in the second round. This one is probably going off to COMC in the near future, unless there is a Cincinnati Bearcats collector that is interested. That's since I also got this: 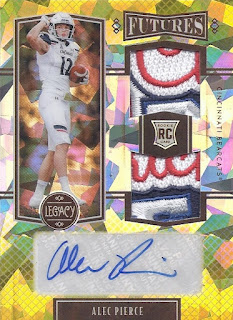 Here's a better scan of a Pierce auto/relic. To go with the brightness and the patches, this Yellow Diamond parallel comes in at a mere 10 copies. While I rather doubt that patch was from the game itself, the patch comes from the 2021 Peach Bowl, where the Bearcats lost to Georgia. I don't know why an item tied to a rather high-profile loss is used, but at least it still adds even more colour to a rather colourful card. This one is probably more likely of the keeper than the previous one, but if you can do significant damage to my wantlists, then I could be convinced to part with this one over the other.
There you have it!
Posted by buckstorecards at 10:30