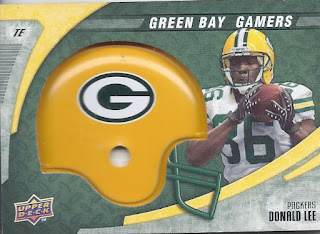 Definitely one of the more interesting choices for a visible card! And since he did win the Super Bowl as a member of the Packers, I can bust out the MST3K clip!WOO! Packers! 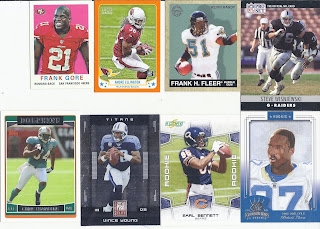 With that start, I'd already think this was the most interesting quarter of the repack, but then there is also this group starting off with a trio of minis. The Ellington is even a parallel. That Wisniewski is also has a pretty interesting photo on it. Not only is it an OL card of a guy sprinting up field, but if you look behind him, he's doing it to block for Bo Jackson! What a great cameo! That's the fun of spending time looking through cards like this - there might always be something nice hiding on it. 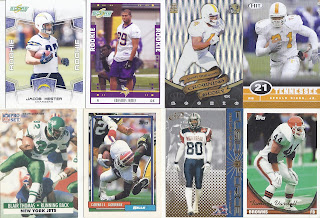 Erasmus Jones is still the only NFLer born in St. Kitts & Nevis. I love when I get cards of people where they are the only one born there for that particular sport. It doesn't show too well in the scan, but that Stallworth card is really shiny, as the opener for back-to-back Volunteers cards. And some Bills content! And some CFL content! Even though that Copeland is a dupe from a box of 2003 Pacific CFL that I busted ages ago. 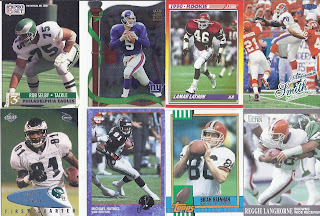 I guess one of these three groupings had to end up as the least-interesting of the bunch, but at least there's one more Bills card in this.
There you have it!

Posted by buckstorecards at 10:55