Considering how the season opener went, it is a perfect time to show off all the new Bills cards that have shown up at my place over the past few weeks. Some are from breaks, some from COMC, even a trade card. 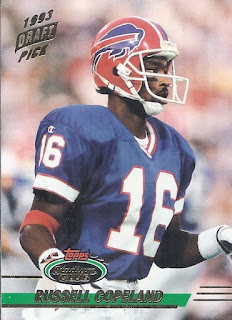 Here's the trade card. It was just an extra card that I had included as part of a set-builder trade through TCDB. It may not have been a superstar's card, but it still was one that I didn't have in the binder previously. Also, Copeland has this sentence in his wiki entry.
" While with the Buffalo Bills, Russell would hit the drum solo to Phil Collins' song, "In the Air Tonight" on point during pregame warmups at then Rich Stadium"
Awesome. 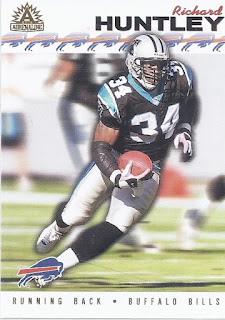 Richard Huntley never played a game for the Bills. He was released about 3 months after his signing. He has no cards where he is both pictured with, and listed with the Bills. Why wouldn't I want this card to commemorate those months? 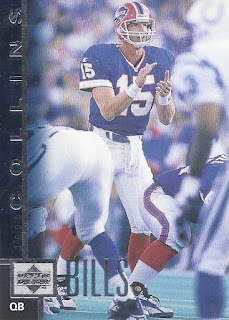 My first in-person Bills game was a 1996 game where they hosted the Colts. Adding cards from games I was in attendance for are always nice little curiosities in my collection. 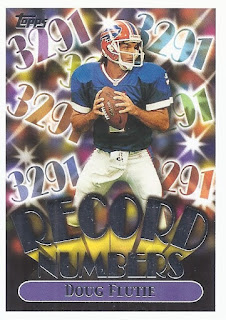 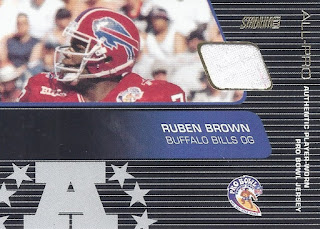 And my only hit in this post. A Pro Bowl jersey swatch from an Offensive Lineman. Ruben Brown made 8 consecutive Pro Bowls as a Bill, so there's plenty of swatches available from his time in Buffalo. This one comes from the 2001 game. 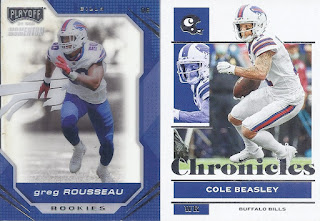 Off to some group breaks! The Chronicles one I was in. Not. Very. Good. But at least I also landed a Josh Allen to throw in a future mailer to Watertown. On the other hand, a random of the same product where I landed the NY Giants spot did much better, even if it was centered around one player. 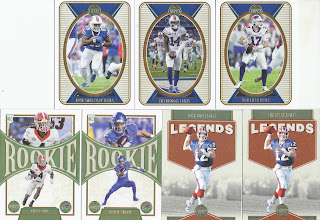 Here's the base content bound for binders out of Legacy. 2 Jim Kelly appearances means there is one both for my Bills collection, and one for the 2/14 collection. There were also a nice number of dupes here, again, to be sent out shortly. 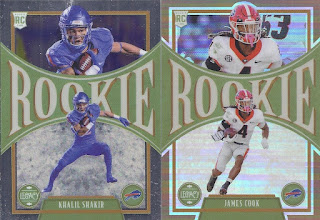 Naturally, there were parallels as well. Shakir is the standard Premium parallel, while Cook's is the Premium Bronze parallel, numbered to 100. James had nowhere to go but up off of his first NFL carry. 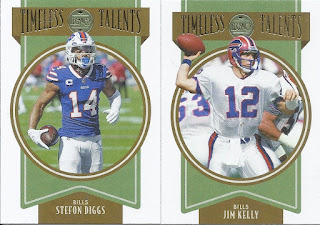 Inserts! This puts my total of  Jim Kelly cards at 223, some in the Bills binder, some in the 2/14 collection, and some in sets. 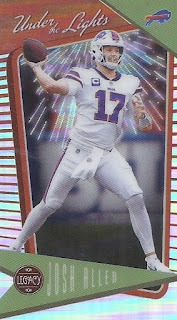 And inserts have parallels, and this provided the lowest numbered card of the break, as here is an 'Under the Lights Mini Ruby' appearance of Josh Allen. That lengthy title means that this card ends up numbered to only 50. And right now, Josh is probably the player you want to see cards of numbered that low. 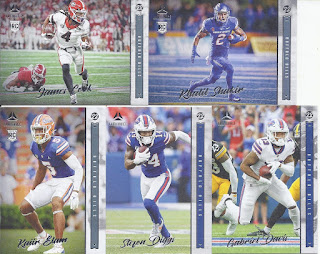 Off to the newest product to show up in this post, Luminance. I'm usually a big fan of the full bleed photos used in this, but the shaded portion from the team name just doesn't work. But James Cook still gets a spectacular photo (I'm assuming from the title game) on his photo. Hopefully for Dallas Turner, he reaches the pros and gets a card of his own, and he's not limited to being flat on the field after a missed tackle. 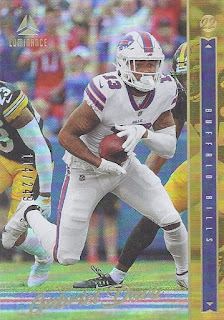 No Josh Allen among the base, but he'll show up soon. But first,, here's a /249 gold parallel of Gabriel  Davis. 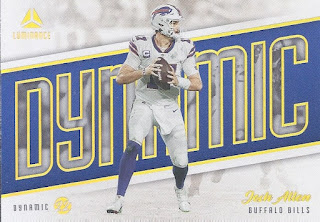 Here's Josh Allen making his first Luminance appearance, in the returning Dynamic insert set. It is a little brighter than in previous years with a move to white from the darker form. 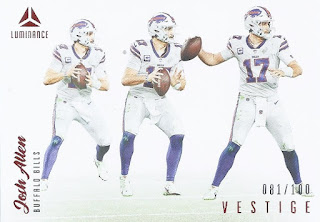 Vestige is new this year. I like the multi-image format used, even if the three photos used in this case makes Josh Allen look deceivingly immobile. These /100 parallels of the insert are the orange ones.
And there you have it!
Posted by buckstorecards at 11:02