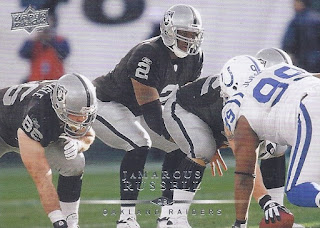 And your final visible card. This might have been the last time in history that anything JaMarcus Russell related has been considered a selling point for anything. 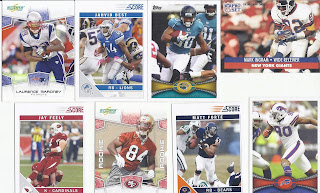 No, I didn't hose up the framing on that Mark Ingram card. It really was that horrible on the original card. I did on that 49ers rookie card on the bottom row - cutting out Josh Morgan's name. 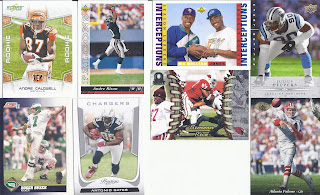 Does a card only half-dedicated to a Bills player count as a Bills card? In the case of that Henry Jones/Audray McMillan card, it certainly does! They'd also share a leader card in Topps in 1993, but not a photo. Ruzek is the final kicker card in this repack. And it wasn't until I took a good look at that Jeff George that I realized that it was an Electric Gold parallel. I think these fell one-per-box at the time. 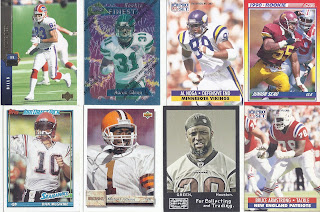 And the finale. There's the last Bills card of this, and I'm happy to add a new Andre Reed into the binder. Al Noga was referenced during the classic MST3K episode 'Mitchell', due to the resemblance of the burglar at the beginning of the movie to Al (and the show's base in Minnesota). Even though there's probably several million of them out there, that Seau is a pretty nice rookie. McGwire was a good pull for the time.
There you have it!

Posted by buckstorecards at 12:19