The beginning of the month seems to be a perfect time to show off the final 2/14s that will go into my collection before my birthday, and likely the final candidates for my favourite cards from the past year when I do my annual top 10 countdown. 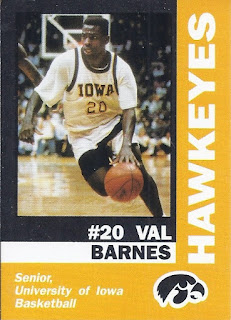 Some of my favourite members of the 2/14 club are the handful that use 'Val' as part of their name. I've got former football player Valerian Eme-Ezeoke. Wrestler Ayako Hamada's middle name is Valentina. And I've got some Beanie Babies with listed birthdays as 2/14. And now, I've got a collegiate card of Val Barnes. 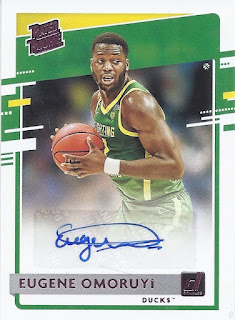 Again, with apologies to Cards on Cards, here's my second autograph out of Chronicles Draft of  Eugene Omoruyi. He's only made a couple of appearances so far for the Mavericks, so I'm hoping the prices on these continue to fall. Maybe I'll accidentally acquire a dupe of these and be able to send it off to Portalnd. 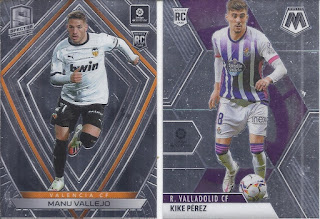 Yesterday, I posted the first soccer card that wasn't a 2/14 guy. So, here are a couple 2/14 guys to offset that. I'll just hope that the latter of the two has an Enrique Hernandez thing going on with his name. 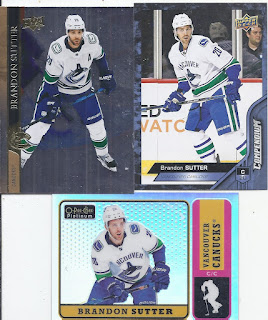 Brandon Sutter wins the numbers game this time, with 3 cards, all of which were e-pack acquisitions. In fact, that's true of all the hockey content in this post, whether I traded for them on the site, or added them inexpensively on COMC. 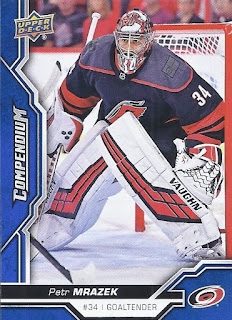 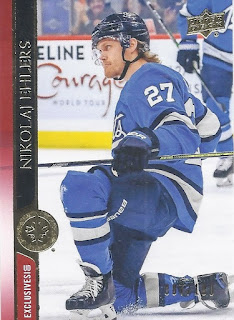 And one more Ehlers. But this one is pretty nice, combining an alternate jersey with being one of  the rarer 'Exclusives' parallels, being limited to 100 copies. Considering that there seems to be a lot of the flagship stuff printed last year, this was probably a tougher pull than other years.
There you have it!
Posted by buckstorecards at 08:55