It Was All Yellow 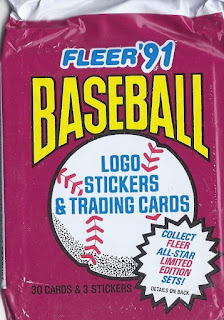 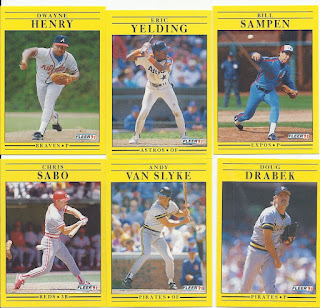 Wrigley Ivy is always a nice way to start a pack, and there's a second appearance of that stadium with the bricks visible on Van Slyke's card. That swing-and-miss photo is a very unflattering photo choice for Sabo's card. Swing and a miss! And Expos content, too! 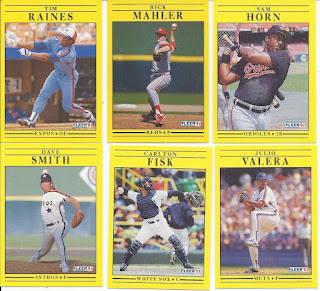 More Expos content! And a Met as well! The multiple bats makes for a rather unique BP photo for Sam Horn, and just so both Chicago ballparks get mentioned - that's certainly old Comiskey in the background of Fisk, with a photo worthy of modern Panini releases. 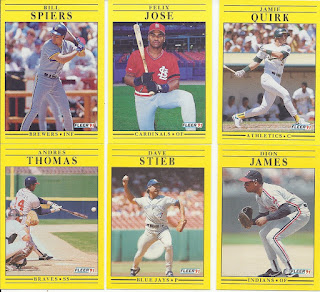 In contrast with the Sabo in the first group, that Thomas is a beautifully framed photo of an at-bat. And there's the first Jays appearance in the pack. Dion James works perfectly with the border and the tight cropping. 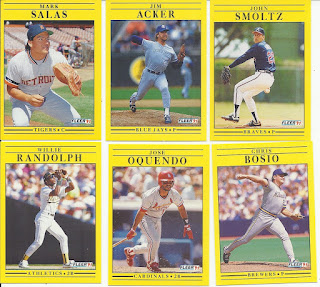 A Jays appearance and a HOFer. That's a perfectly fine grouping. 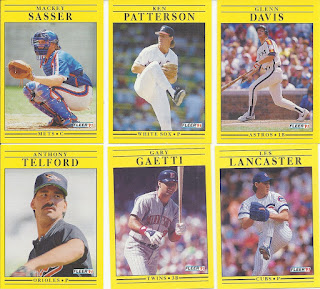 Mets content highlights the last batch of cards. A nice bunch of cards for my team PCs, and a couple interesting photos makes for a great group of cards, even if they're obnoxiously early 90s bright.

But there were stickers too! Logo stickers! A grand total of zero that are still in use in that format today.
There you have it!
Posted by buckstorecards at 07:40