Another post with cards that either originated from cards from the e-pack site directly, or ones I grabbed cheaply through e-packs. 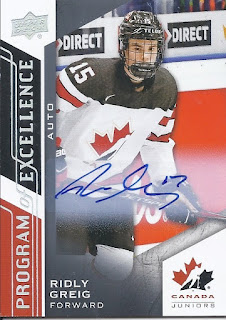 Ridly has yet to play for the Senators, but he is a first round draft pick of the team. So this qualifies a Sens card for this post, but it probably won't make its way into the team collection binders. Unless he ends up never playing a game for Ottawa, in which it will count as a Sens card in a zero year sense. As always, my binder, my rules. 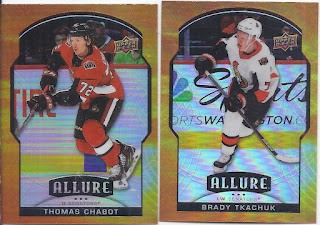 I'm not sure if sunset parallels are a good name for parallels far away from the sunsets of their respective careers, but they do have nice refractory shine to them, and that's all I ask for. But there's really no comparing the shininess of those Allure cards to the brightness of this Dazzlers entry from 20-21 flagship. This will be returning in 21-22 with another chance to blind your enemies through cardboard. 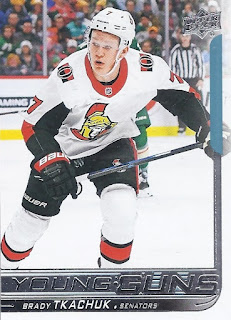 While I have no evidence that this card really did originate through e-packs, I'll call it as such just to give me a chance I took a chance to show it off. I threw a lowball offer on this rookie of Brady Tkachuk over on COMC, and ended up getting this keeper for my Sens collection for about 60 percent of the current price of these over there. It might not be the most flattering photo, with the visor creating a googly-eyed feel to the card, but is still his Young Guns card.
There you have it!
Posted by buckstorecards at 09:30