More mailbag in this post, with this one covering cards that showed up from the companies themselves. 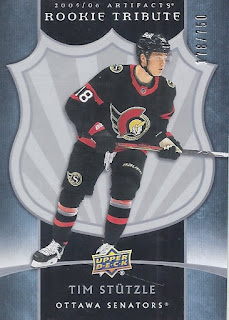 2005 was the first season that Upper Deck released Artifacts, and that release got a salute in this year's release with 10 of the rookies being available as redemptions. Unlike with the main set, the redemptions from this insert set weren't limited to those that made their debut after the season start, really giving it a Top 10 feel. It also provided my first serial numbered card of  Tim Stützle. 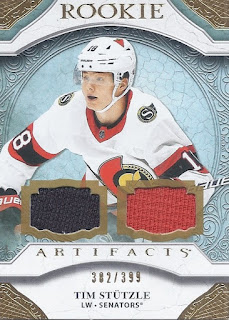 And the redemptions in this set also provided my first  relic of his. It is always best when the swatches feature two different team colours. 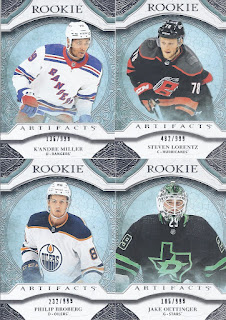 Here's the more traditional base redemptions. Miller's probably the big name in this group so far, but Oettinger has started to see some action this past season as well. Lorentz is a local kid, and that's always a nice addition to the collection. Broberg hasn't seen the NHL ice yet, but since he was in the bubble(s) last season, he still counts for a card. He was a first rounder in 2019. 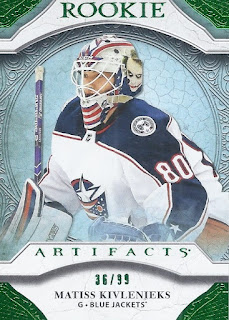 Meanwhile, my only emerald parallel redemption was a depressing one of the late Columbus goalie. 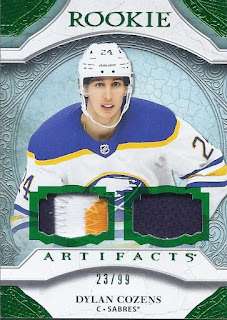 So that Stutzle relic wasn't alone in the mailer, there was this patch to to alongside it. 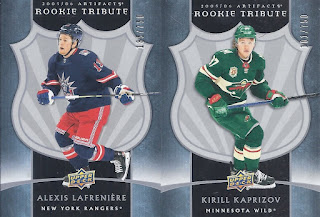 As well as a couple more Tribute cards to accompany that one. See what I said about this insert set really having an elite feel to it? Alexis, Tim, and Kirill were in the 1-2-3 slots in that numbering scheme, so maybe this was more the luck of my pulls versus the checklist. 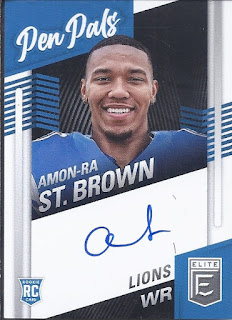 A redemption post is also the perfect spot to show off a rather quick redemption out of Panini as well. This showed up less than two months after entering it into Panini's site, with some nice blue ink to match the team colours. I was chasing Penei Sewell content for a future Cards on Cards mailer, but this will nicely suffice as a consolation prize.
There you have it!

Posted by buckstorecards at 10:49