Appearance and content-wise, this is as close I can get to finding a repack product from a major company, so I might as well buy at least one of these from the hangers at Wally World! 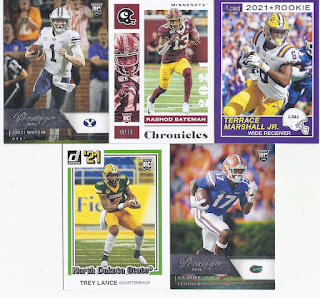 Even though these are all base-cards in the 400-card base set, the Bateman is the base design for Chronicles. A solid start with 2 of the top 3 draft picks in this group, and Marshall being the only draftee outside the first round. Having the border design done in the team colour really looks great on the Score designs. The 1981 Donruss looks really nice when applied to football as well. 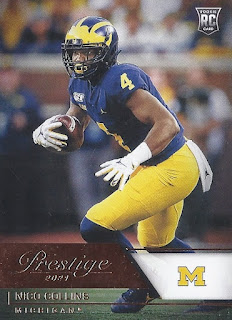 I really don't know at what rate the parallels fall, but here's the only one this pack had - a bronze Prestige. This one's already set aside for a future Ann Arbor-bound package. 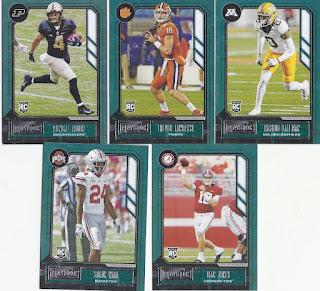 Here's those promised 5 Playbook cards. Again, not a bad haul here with Jones and Lawrence, even if the design is a little border-heavy for my likings. But at least some of the photos burst through its confines. 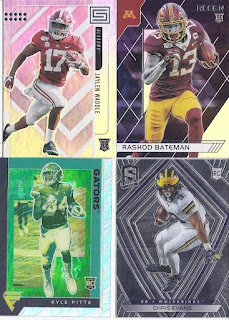 The pack wraps up with the shiny portion. If you've been paying attention, there's the third appearance of Rashod Bateman. I also landed an auto of his from my break of Luminance, so it looks like he'll be the guy I'm a magnet for this year. I guess I could do worse than a Lamar Jackson target. Since green is kinda/sorta a colour for the Florida Gators (the logo, at least), that Flux design feels appropriate. And there's now a second card for an Ann Arbor mailer.
Perfectly acceptable hanger pack!
There you have it!
Posted by buckstorecards at 11:22