Time to start digging into my most recent shipment from repack central! 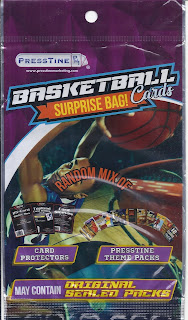 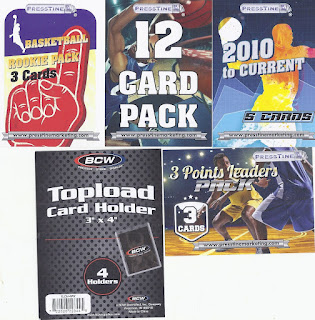 With these as the contents!

Clockwise from the top left, here's the rookies pack. Nothing too notable here, but I've got something for a future Cards on Cards mailer, and Don MacLean did pick up a Most Improved award during his career. 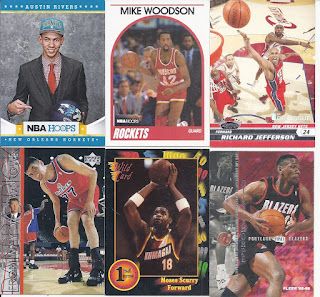 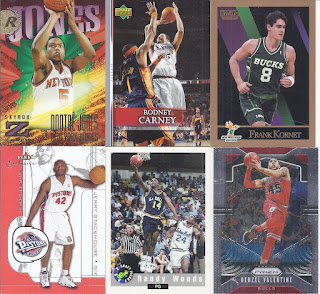 Here's the 12 cards in that repacked pack. Austin Rivers looks like he's a teacher showing off "This is a basketball" to pre-schoolers. The Jefferson is a 1st Day Issue parallel, and is /1999 for the only numbered card in all of this. Muresan is a 2/14 baby, but that's a dupe. Cool photo, though! The 1995 Fleer gives a vibe of current Illusions designs, so maybe some of those the designs haven't aged so poorly. Meanwhile, Dontae Jones looks like he's going to get devoured by the sun. 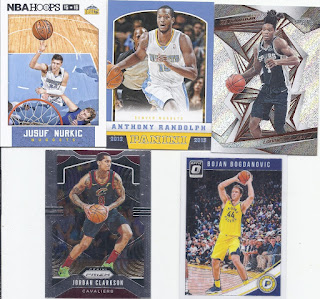 There's the expected lower end stuff in the 2010s pack, but there's some mid-range stuff as well. I love the abrasiveness of the Walker, and that's just the base card design in Revolution.

For the second straight post, I end up with a pair of cards bound for a Wolverines collector with the 3 point leaders pack. If only the final card had been Junior, I'd be 3 for 3.
And evidently the great toploader shortage has drawn to a close, because there's a bunch of 'em!
There you have it!
Posted by buckstorecards at 09:55