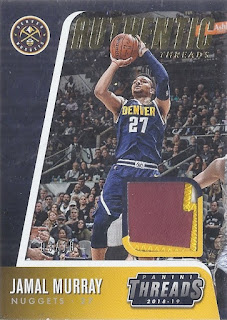 Looks like it will take until the third post of the year for me to show off multiple cards. But this is another one worthy of a post on its own. I got extremely lucky, adding this sweet patch to my inventory not long before Murray broke out during the playoffs, leading the Nuggets to a comeback from being down 3-1 in the series against the Clippers. I would not have been able to pick up a /10 patch for the price I did after that.

I can't exactly place the patch against the jersey, but it looks like it came from the upper left corner of one of letters on the front of the jersey that the team debuted during the 2018 season. And that isn't  merely a red patch piece, but flatirons red.

No matter the specific colour or the location, this is the lowest numbered Murray card in my collection, and will probably stay that way until basketball prices return to a sane level.