Just a couple new cards for the big binder today. 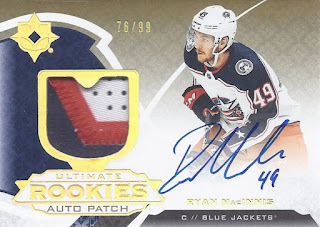 Ryan MacInnis is sort of a new face in the collection, but only in NHL form. I have several of his cards already from his CHL days with the Rangers, but he finally made his NHL card debut with Columbus during the 19-20 season. This is an Ultimate Rookie Patch Autograph, and that three colour patch is pretty ultimate. And the best thing is that his cards, should I acquire dupes of any, they can move into the Rangers alum collection. He also joins the Acunas and the Guerreros as people I have autos of both the father and the son. Father Al already has auto appearances in my Rangers alum collection. 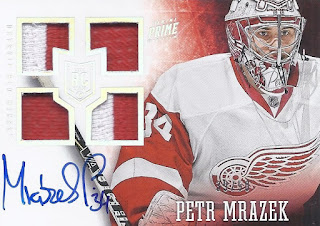 Petr Mrazek, on the other hand, is a far more familiar face. He's seen here on a Holo Silver parallel out of 13/14 Panini Prime. Suitably, there's a couple prime two-colour swatches accompanying his autograph.
And there you have it!

Posted by buckstorecards at 10:11