Time again to show off some cards I grabbed solely for the purpose that I liked their handwriting, or at least that was the primary purpose. 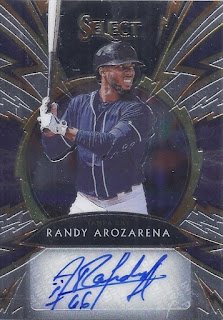 While Randy Arozarena's signature will be the most jumbled of the lot I showed off today, it wasn't the handwriting, but the artwork that made me pick this up. Randy joins Jimmy Mann in terms of taking advantage of a space in his signature to add a little face to it. Fortunately for this very limited art-to-sig PC, I grabbed this long before his playoff heroics, as well as his legal issues in Mexico. 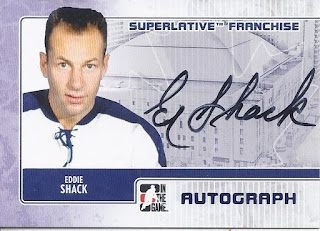 This one was purchased so long ago, Eddie Shack was still alive at the time. It is a nice, instantly readable signature, and since ITG couldn't use logos, they do the next best thing and show Maple Leaf Gardens in the background. 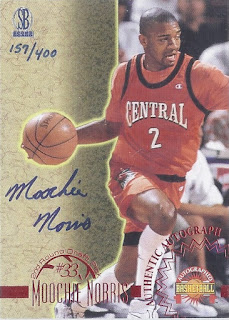 Good penmanship is a bonus when you pick up an auto of someone named Moochie. His real first name is Martyn, in which case I'd go with 'Moochie' too. But the same would be true for pretty much any name if Moochie was option 2. As another bonus, since he made his debut with the Vancouver Grizzlies in 1996, I can, and will consider this a Grizzlies card. Why? My binders. My rules. 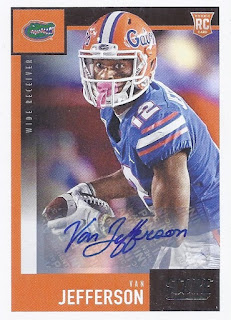 In terms of penmanship, the Rams were the big winners of the 2020 NFL draft, landing both Jefferson and Cam Akers. I'll give the nod to Jefferson though, as he stays consistently legible throughout a longer name. I'm going to assume it will eventually implode to something abbreviated as the signing season drags on, but for now, I'll show my appreciation.
And there you have it!