Let's dig into the group break mailbag today, with some cards from an inexpensive basketball mixer. I grabbed the Raptors slot, and decided to take a low-priced gamble with the Kings, hoping for some old-school niceness. I waffled between Sacramento and chasing Jamal Murray with Denver, and in the end I made the better choice. 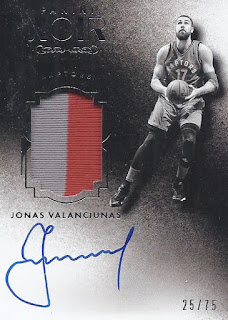 The Raptors landed me a grand total of one card. It is a pretty nice one. I joke about having more autographs of Jonas in my possession than his agent, but this one is only my 5th. It is actually the prime swatch that is the most interesting to me here, landing my first bit of grey/silver from the uniform. 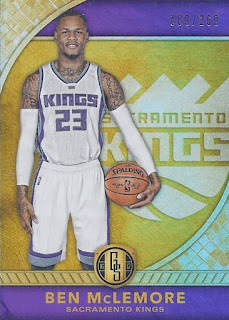 In terms of volume, Sacramento hit far better for me. I started off with this nice base card. I always love then the team logo is in the background of a design. 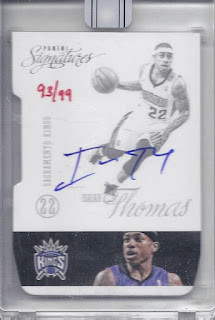 And then there's this. This might look like it is from 2012-13 Panini Signatures, but this is actually from 2015-16 Replay. It is sort of a buyback auto product, but most of the cards look to be unredeemeed redemptions as opposed to cards that are bought back and then auto'ed. At $200 for the original price, I admire Panini's brass ones to charge that for a product that includes Greg Stiemsma, Peyton Siva and Rodrigue Beaubois. Still, with Isaiah Thomas being a redemption in his rookie season, that means there are a lot of his cards in the product, which, given his current season, might be the one plus about this release. 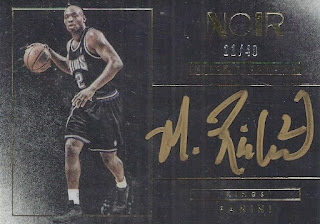 Enough about that, let's look at something really nice as I return to Noir for a beautiful card. An on-card autograph with a gold pen on the black background is a perfect combination. Adding a HOF autograph to my collection? Even better. 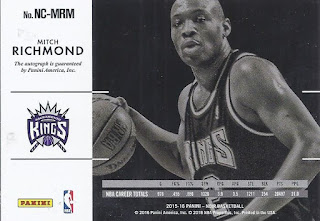 And even the back of the card is nice. If you're gonna re-use a photo, using a black and white shot as contrast to the colour one on the front is the way to do it.
Posted by buckstorecards at 07:42