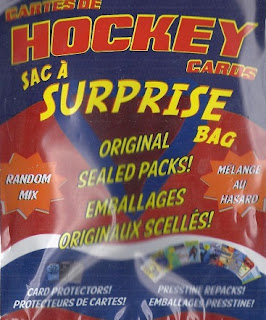 Much like with the $1 hangers, it was way too late in the year to be busting some of these. So, here's 2 of them. 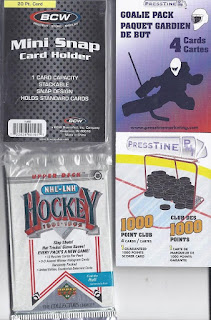 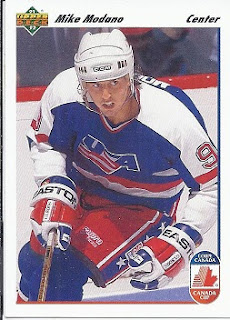 I'm not highlighting everything in the UD pack. This Canada Cup USA card was probably the most interesting of the contents within, though. 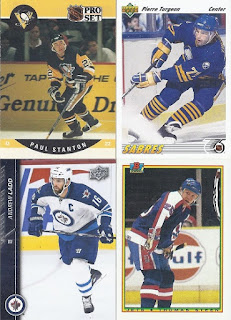 Similarly bland was the 1000pt pack, although this blurb on Turgeon's wikipedia page was pretty interesting:

George W. Strawbridge, Jr., an active shareholder of the Buffalo Sabres and director and member of the team's executive committee for more than 30 years, named one of his thoroughbred racehorses in Pierre Turgeon's honor. Turgeon raced for Strawbridge's racing stable in France where he won several conditions races and, after retiring, is developing into a successful sire. 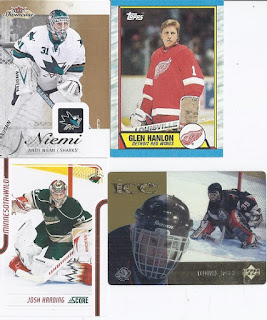 It was the goalie pack that brought the binder content in this baggie, with a pair of mask binder cards on the left, and an interesting acetate card with the Hasek. This was from a McDonald's give-away set. 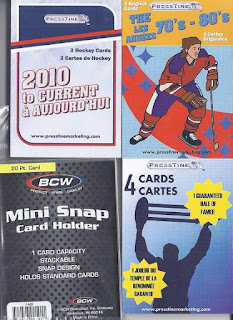 The way I'm acquiring these snap holders, I may start sending out cards in my trade packages in these as opposed to toploaders. 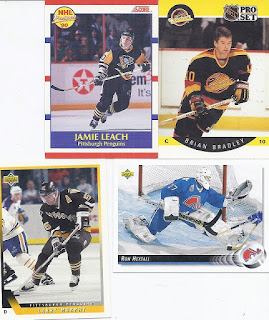 The HOFer pack. I'm more interested in the great photo on the Hextall card.

The 70s/80s pack was all 80s, as usual. But, there were a couple interesting cards among the three. First, you've got an airbrush special with McBain, but it is the middle card that wins the day. Mikko Leinonen earned a Record Breaker card after picking up 6 assists in a playoff game (Gretzky would tie that record several years later). Still, that was not enough to earn him a regular base card in the 82-83 set.

The Leinonen was easily the best card in either bag, and lifts this to being a pretty fun break.
Posted by buckstorecards at 08:19