Off to my COMC 'To Be Posted' box for this post. 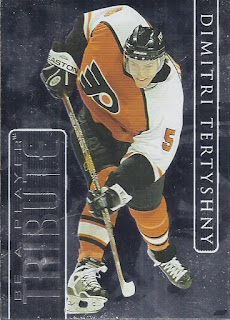 I'm starting with a memorial card. Dimitri was killed in a boating accident during the off season (and if you've got a week stomach, I don't recommend trying to find out more info), and he got this card in Be A Player's 1999-2000 release. Steve Chiasson also got a tribute card in this unpleasant subset. 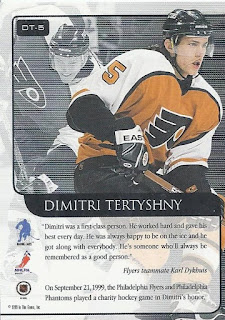 Here's the back of the card. 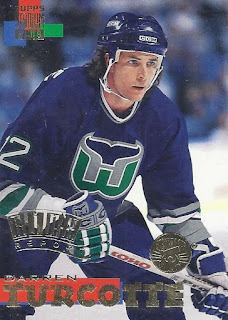 This does seem like an odd card for me to pick up. Sure, this one is a Stanley Cup Super Teams parallel, but why I would I get this (and not immediately ship it off to Shoebox Legends?). 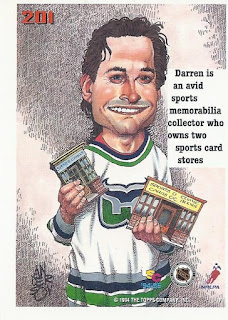 But this one had a card-themed cartoon on the back, so this explains that purchase. 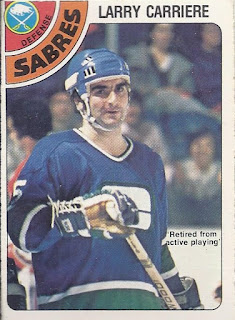 The team listed on the card not matching the jersey. The 'retired from active playing' update. The only way this could not be more of an OPC card was that it lacked a horrible air-brush job on the jersey. Larry did play 9 games for the Sabres the previous season, but I guess they didn't make a trip through Washington for the photographer to get a picture. 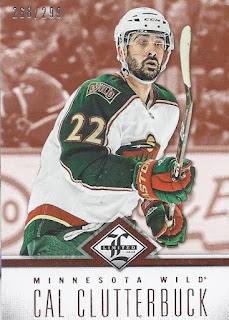 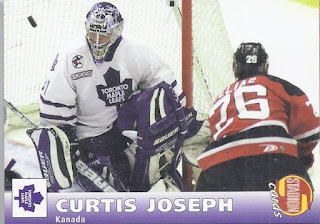 Stadion makes a return to the blog with an odd photo choice. For all the world, it looks like Elias has put the puck past Cujo in this picture. The photo is dated on the back, and a look at the box score for that game shows that Elias didn't get a goal that game, but you wouldn't know from that picture. 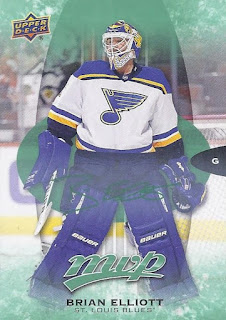 From an actual Curtis Joseph card to a card that salutes Cujo, or at least his classic mask on this card out of MVP. I believe these green parallels were available only in E-packs, which is why the real thing was absurdly cheap at COMC. With his move to Calgary limiting options to get a cardboard version of the mask, it was this MVP card that had the best view. 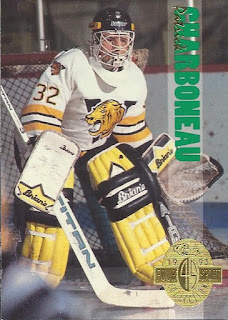 This a Sens card. Charboneau never played a game for the big club, so this card that listed his draft status is the only option for my Senators collection. 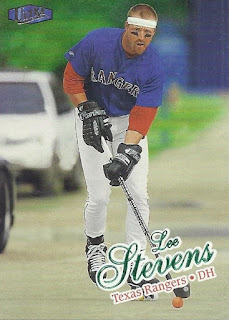 And this is a hockey card. My binder. My rules. No objection.
Posted by buckstorecards at 19:51