Time to post the cards from the 11th box and the best box of the break. This was actually the first one I opened, but the randomizer had this post show up late. For my first case, it was interesting to have what would certainly be the best box of the break show up first, since that meant that while an individual pull later might be great, there wouldn't be something this consistent the rest of the way home. 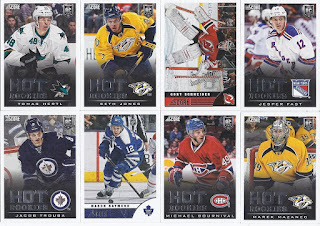 And we start with the Score inserts. A trio of really good rookies here with Hertl, Jones and Trouba. 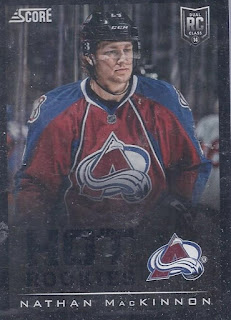 But those weren't close to the best of this box Score-wise. The black parallel of the chase rookie in this set. I thought these would fall one per case, and watching other breaks, that seemed accurate. Either way, and comparing it to the gold parallels, I doubt that the print run for these hits triple digits. And, after getting a gold parallel of this earlier, and the regular base earlier, that's a pretty nice rainbow to have built entirely from pack-pulled cards.

Off to the Prizms. Only Loui is the dupe in this bunch. 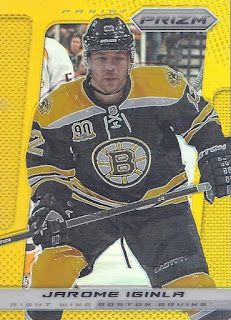 I still haven't reached the official hit portion of the box, and I've already got my second gorgeous card of the break. This gold parallel is numbered to 10 copies, and it is really looks nice here with the team colours. A box full of keepers so far! 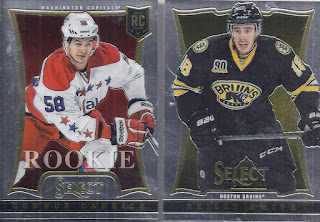 And that's the third Reilly Smith Select base card so far. Pretty much the only real dud grouping of cards so far. But at least both guys are still in the NHL. 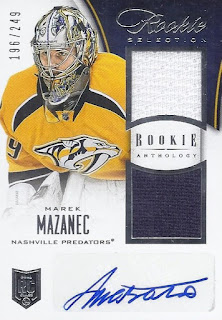 Off to the hits, and the Rookie Selection might have been the least interesting of the bunch player-wise, but at least he has an interesting signature.

Not a bad name to get for the Score autograph. 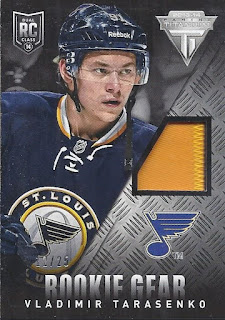 While this would have been even better with an autograph attached to it, this Rookie Gear of one of the chase players in this set is still a great pull. This two-colour patch is numbered to 25, and looks to come from the border that surronds the logo. 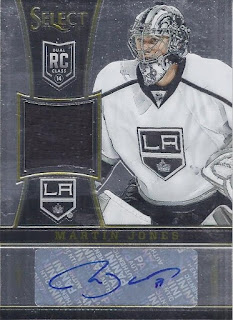 A nice Select card as well. While this wasn't the best at the time, Martin's move to the Sharks (via Boston) has been an incredible boost to his career as he backstopped San Jose to the finals last year, and doesn't show any sign of slowing down yet. 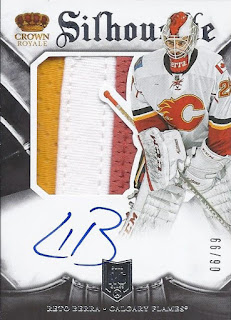 And my favourite card of the bunch, at least aesthetically is this beauty of Reto Berra. The Silhouettes are always nicely done, and this really is no exception with a three colour prime swatch. And an on-card autograph as well. A great way to finish an excellent box.

And one box to go!
Posted by buckstorecards at 06:54