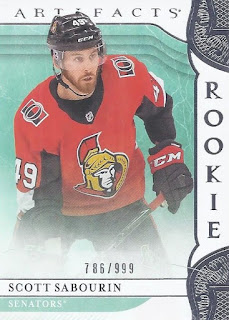 While I had already added his Young Guns and OPC Update card to my Sens collection, the Senators team redemption would technically become my first card of Scott Sabourin in the collection. He really didn't fit the usual rookie description, making his NHL debut after over 300 AHL games. A goal in his debut game pretty much guaranteed he'd be the Sens representative in this. 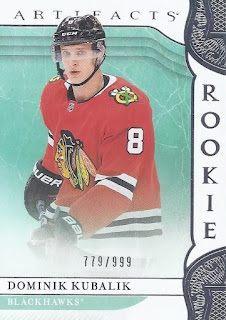 The Wild Card redemption are generally used for the second best rookie on the team. It really wasn't a surprise when Kirby Dach, the 3rd overall pick, got the nod for Chicago. But it was Kubalik that was named one of the finalists for the Calder Trophy this season, alongside Quinn Hughes and Cale Makar. Sometimes, things work out oddly. 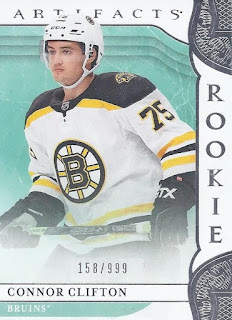 I got this Connor Clifton redemption in the same box where I got the Makar autograph linked above. This finally completes that box. 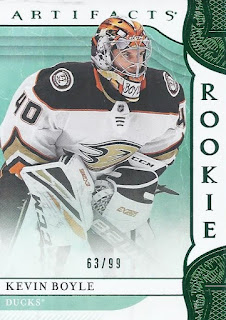 Hey! An Emerald redemption! I guess the Ducks didn't have any qualifying rookies in the early part of the season, and with Max Jones being in the original set, Boyle was really the only option. That's still better than with the Flames, who had Dillon Dube. He was a Wild Card redemption last season, and didn't even make an appearance in O-Pee-Chee this year. 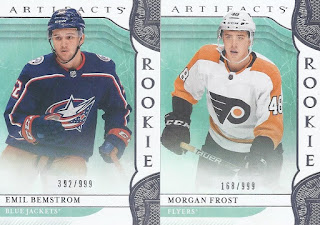 And the final 2. Emil was the redemption for the Blue Jackets, while Frost was another pretty good name relegated to the Wild Cards in favour of Joel Farabee.

That should end the 2019 Artifacts posts for the season.
Posted by buckstorecards at 03:30